ONE WEEK TO WIN HER BOSS by Barbara White Daille: #OnSale #99cents

Barbara White Daille is here to tell us about her sweet romance ONE WEEK TO WIN HER BOSS. OWTWHB is on sale for .99 cents until January 4 so pick up your copy now! 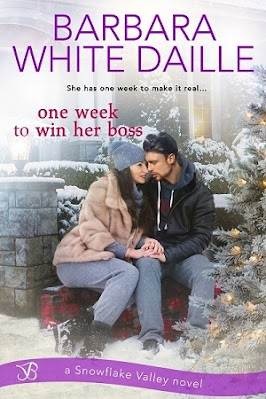 Jana, thanks so much for hosting me here at your blog, and best wishes to you and your readers for a great year ahead!

One Week to Win Her Boss, sweet romance by Barbara White Daille

Single mom Amber Barnett loves family, kids, Christmas…and unfortunately, her boss, confirmed bachelor Michael DeFranco. It's a crush she really needs to get over. Except, when she’s temporarily forced from her apartment, her only option is to stay at Michael’s private ski lodge, where she's the housekeeper. No problem. Her handsome boss rarely visits Snowflake Valley unexpectedly, plus he’s spending the holidays with his family. Or so she thinks…

A stormy Christmas Eve reunion leaves Michael seeking the solitude of his lodge, where he finds Amber in residence—and in trouble. Attempting to save her from her matchmaking family, he announces they’re a couple. His good deed backfires when they’re instantly included in each and every holiday event in town. So much for solitude.

Only the more time he spends with the beautiful, cheery brunette, the more he yearns to make things real between them. But he and Amber want different things, and Michael could never be the family man she's looking for.

Let him be the front man here. Michael settled back in his chair and sipped his coffee. This deal sounded worse than the Barnetts’ family project. No way would he get involved in either one.

“I’m not eligible since I’m attached,” Lyssa explained. “Everybody in town knows that when someone competes for Snow Ball King or Queen, they’re declaring themselves single and looking.”

Amber’s face turned as pale as her white ceramic mug, as if whatever illness bypassed her last night had just hit full-force. “I refuse to run.”

“You know the rules as well as I do. If someone is nominated, their name goes on the ballot.”

He caught it again—that same hint of despair he’d heard in her voice last night. Maybe this snowball thing tied into the secret she was keeping from her family.

“Hmm…” Lyssa shrugged. “Well, it’s true you don’t have to pursue winning the crown. But how will it look for Mom and Dad if a Barnett is nominated but doesn’t make even an attempt to win?”

“Why not?” Lyssa demanded.

“Because…because…” Amber’s gaze met his. He didn’t read anything close to a plea for help in those blue eyes, couldn’t find the hint of a silent SOS. Of course not. Amber’s independent streak would never let her lean on him. Yet he still felt the need to give her an out—maybe since he could relate to having family push her against the wall.

What the heck… He reached for her hand. “Amber can’t compete,” he said firmly, “because we’re together.”

Her fingers clamped around his, nearly cutting off his circulation.

Nick slapped him on the shoulder.

Amber stared at him, her eyes now like twin blue pools, as the saying went. Eyes he could drown in—if she didn’t kill him first. 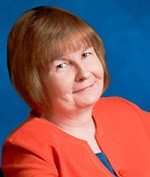 Barbara White Daille lives with her husband in the sunny Southwest. Though they love the warm winters and the lizards in their front yard, they haven’t gotten used to the scorpions in the bathroom. Barbara also loves writing, reading, and chocolate. You can find her books, blog, and newsletter signup here: https://www.barbarawhitedaille.com