Diana Rubino visits today to talk about her recent release, NOW AND ALWAYS, a time-travel romance. It's always great to have a little paranormal right before Halloween! Thanks for being here, Diana! 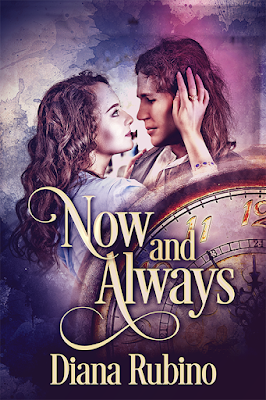 The present: Historic preservation architect Leah Halliday falls asleep in the bed once owned by King Richard III. It sits on one of many mysterious Ley Lines that crisscross England. She wakes up in the same bed, but in King Richard’s time, 1485.

1485: Hugh Radcliffe, trusted knight of King Richard, believes Leah is his bride Matilda. The king arranged the marriage, and Hugh never set eyes on her before now. According to Leah’s history books, Hugh was executed for treason and drowning his first wife. When she meets Andrew Gilbert, another time traveler from the 21st century, she learns that Hugh’s treason and drowning of his wife was a setup by a Welsh clan, the Griffins, who’s hated Hugh’s family for centuries. As she falls in love with Hugh, she finds out he’s innocent. She puts her life on the line to clear his name and get back home--with him. They do live 'happily ever after' -- but in what century?

Some tidbits about how I came up with this idea and created Leah:

I wanted to write a time travel set in Richard III’s time, so I placed Leah there with Richard III’s bed as a portal, which sits on a Ley Line. (very strange things happen on Ley Lines; no one knows the reason for this phenomenon—it could be the earth’s magnetic field.) I’m really big on justice and fairness, and wanted to use that as one of the story’s themes. So I have Leah use her knowledge of what she knows about Hugh Radcliffe from history books to clear his name, save him from being falsely accused of treason and a horrible death on the battlefield.

I like Leah because she’s adventurous and even though she tries hard to survive in this difficult and dangerous time, she puts her life on the line to save Hugh, who she’s grown to love.

I identify with her because I’m rather adventurous; I went to live in London by myself after college graduation (even though it wasn’t the 15th century!) at times it was scary, but I knew my courage would pay off.

What I like about Hugh is that he’s honorable; he doesn’t want to leave his call to battle to join Leah in the 21st century until he’s fought in the battle. He’s also a gentleman, and was very devoted to his wife and son before they died. He’s perfect for her because he’s the ‘pre-incarnation’ of her late husband Matt, the love of her life. This is the secondary theme, how true love and our souls can transcend the time continuum.

I’d already written two books set in this time with Richard III as a minor character; for these books, I read some great books about Richard including The King’s Bed by Margaret Barnes and Crown of Roses by Valerie Anand. I took several trips to England and went to Richard’s favorite haunts, his residence at Middleham, where he died on Bosworth Field, and the Richard III Society helped me a great deal, especially the former President, Peter Hammond and his wife Carolyn, the former Librarian.

"Come with me, Hugh. We may never get another chance," she pleaded, and he sat on the bed next to her.

"I must go to battle, Leah," he declared, “but I cannot leave your side until I convince you. And since you are even more stubborn than I, this shan’t be easy. You know I cannot live without you. Surely you can wait a few more days."

"Hugh, you'll die, I know you will.” Tears choked her voice. “Don't go to battle just to die, please, I lost one husband, don't let me lose another!"

"But I am not truly your husband...yet."

"You never will be if you go to battle!” She grasped his arm. “Please, Hugh, Richard will have understood. Come with me."

"Nay.” He gave a resolute shake of his head. “I cannot and will not.”

As they spoke she pulled him down with her into the center of the bed. She reached his lips with hers and their mouths locked in desperation, neither wanting to let go. His arms enveloped her. She wrapped herself around him, bringing him farther into the feathery deepness. Together they floated and drifted. She felt that strange pull, that spinning sensation she'd felt that long-ago night. As her eyes closed, her body floated in spacetime, a portal not of her world or any other world; a void they both entered. She found her voice and said, "Hugh, are you with me?"

"Aye." He hadn't actually spoken it, but she knew he was there. "I am with you. But please let me go back. I must join the king, I must."

She grasped him, her fingers clamped around his arms. He was still with her. "No, Hugh, come with me, you no longer belong here."

Then, ever so slowly, he began slipping away.

"Hugh! Stay with me!" she shouted.

"No! Oh, God, no!" She clutched at his arms, his hair, his doublet, yet he kept slipping away; that same force bringing her forward was pulling him back. He grabbed her arms, but his fingers lost their grip. She felt him tugging at the watch. It slid off her wrist, scraping her knuckles as he grasped at it. Her last connection with him was now broken as the force tore them apart. "Hugh!" she screamed one last time, flung her arms out to him, but clutched only emptiness. He was gone.

Purchase NOW AND ALWAYS at your favorite digital store:

Diana writes about folks through history who shook things up. Her passion for history and travel has taken her to every locale of her books: Medieval and Renaissance England, Egypt, the Mediterranean, colonial Virginia, New England, and New York. Her urban fantasy romance FAKIN’ IT won a Top Pick award from Romantic Times. She is a member of the Richard III Society and the Aaron Burr Association. With her husband Chris, she owns CostPro, Inc., a construction cost consulting business. In her spare time, Diana bicycles, golfs, does yoga, plays her piano, devours books, and lives the dream on Cape Cod.