My Review of "Spirit Sight" by Marie Powell 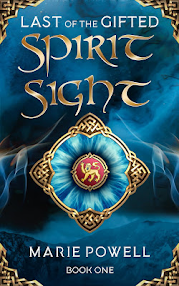 “Spirit Sight” is book one in Marie Powell’s Last of the Gifted series. Hyw and Catrin are a teenaged brother and sister living in Wales in the thirteenth century. Their time was not an easy one; England has just invaded and declared war on the Welsh. Hyw and Catrin’s family is loyal to Llewelyn, the Prince of Wales, and all their lives are danger.

But Hyw and Catrin are no ordinary teenagers. They are the last of the gifted, their special gifts handed down to them through their mother’s family from the ancients. Hyw has a special affinity with animals. He can meld his mind with a bird and see through its eyes as it flies over the land. He can calm a frightened horse, and bend it to his will. Cat didn’t believe she was given any gifts until she looks into a drop of water and suddenly see the future. Her gift of second sight saves her family as they flee from the English invaders.

Hyw’s ability to see a battlefield from overhead makes him invaluable as a scout for Llewelyn. But when Llewelyn is killed in a surprise attack, his soul merges with Hyw’s at the moment of his death and Hyw’s life is no longer his own.

Though based on actual historical events and people, “Spirit Sight” is also an adventure story and a fantasy novel. And it’s an absolutely fabulous, fun read. You’ll cheer for Hyw and Cat just as I did!

Warrior-in-training Hyw can control the minds of animals. His sister Catrin can see the future in a drop of water. Hyw’s gift—seeing through the eyes of birds and animals—could win him a place in the Prince of Wales’ bodyguard. But ambush and murder force Hyw to stretch his gift in unexpected ways. The slain prince’s spirit melds with Hyw’s psyche to help guide him in fighting back against the English. Catrin sees visions of disaster and death. She must convince the young nobleman she’s pledged to marry to help prevent the genocide she foresees. When Hyw and Catrin reunite, they are all that stand between their people and the invading English army.

My Review of "Water Sight" by Marie Powell 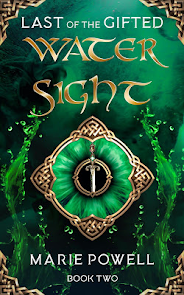 In “Water Sight”, book 2 in the Last of the Gifted series, Hyw and his younger sister Catrin struggle to help their people in their fight against the English. Things are not going well for the Welsh. King Edward I of England has put a price on Welsh heads, their warriors are dying in battle and food is scarce. Can they survive?

But the tougher things become, the greater Hyw and Catrin’s gifts grow. And love blossoms for both of them. But in times of war, nothing is easy. Hyw must decide where his loyalties lie—with his people, the Welsh, or with his love on the English side. Cat was promised in marriage to Rhys at the age of five and has always loved him. But he questions their future marriage, afraid that her gift means she is destined for greater things than to be his wife. Cat’s love and loyalty is put to the test when she must decide whether to rescue the man she loves or to save her brother.

“Water Sight” is based on actual historical events and people with an element of fantasy that feels absolutely right for the times. I highly recommend this series for readers of all ages!

The Prince of Wales needs three magical relics to rally the straggling Welsh forces. Catrin’s gift of Second Sight may be the only hope for success—if she can outwit the English lord who wants to use her gift to capture the prince. Her brother Hyw is on the run with the prince and the dwindling Welsh army. To escape the betrayal dogging their heels, Hyw takes refuge in his evolving gift—until shifting shapes puts his humanity in jeopardy. With Hyw trapped in his magic and her betrothed in an English jail, Catrin faces an impossible choice: save her brother, or save the man she loves.

Excerpt from opening of "Spirit Sight":

He raised his arms, feeling bone and feather flatten against the wind, and knew himself tethered to air currents that smelled of salt and fish, somewhere off the horizon.

He ran below the bird, yet his mind and the hawk’s mind moved as one. He could feel the dry December grasses beneath his bare feet, but he saw as the hawk saw: a flash of grey fur in the stubble, the swaying pattern of a tree branch.

He tried to turn the hawk’s mind—his mind—to his will, and for a moment he succeeded. In the distance he could see the stone watchtower of his home at Garth Celyn, seat of the royal court of Wales. But the hawk’s need was powerful, turning him back to scan the ground they circled. If he squinted—just so—at the yellow and russet clumps, he could make out the leaves of each tree. A shadow flitted from branch to branch.

No, not his. It was the hawk’s beak that longed to rip the flesh from bone and feather. Hyw grasped the bird’s thoughts again and turned its head toward Prince Llywelyn’s tower. There! A streak of movement across the grass. Was it some grotesque beast from the past? He urged the hawk to circle until he could see it more clearly. A single horse and rider galloped toward Garth Celyn.

A messenger! Fast horses in wartime never bring good news. Had the English broken the peace again? Hyw gasped, and his connection to the bird faltered.

The hawk gave a piercing shriek. Hyw felt himself falling, as if he’d dropped from its talons rather than its mind. His feet—the same feet that had seemed to barely skim the ground a moment ago—thudded against the earth. He stumbled and the momentum of his running threw him, over and down until he braced his hands against the mountainside…

Marie Powell’s castle-hopping adventures across North Wales to explore her family roots resulted in her award-winning historical fantasy series Last of the Gifted. The series includes two books to date, Spirit Sight and Water Sight (participation made possible through Creative Saskatchewan’s Book Publishing Production Grant Program). Marie is the author of more than 40 children’s books with such publishers as Scholastic Education and Amicus, along with award-winning short stories and poetry appearing in such literary magazines as Room, subTerrain, and Sunlight Press. Among other degrees, she holds a Master of Fine Arts (MFA) in Creative Writing from UBC. Marie lives on Treaty 4 land in Regina, Saskatchewan. Find her at mariepowell.ca

Last of the Gifted - https://mariepowell.ca/young-adult/last-of-the-gifted/