A SCORE TO SETTLE by Mike Torreano #NewRelease

Mike Torreano joins me today with a look at his new release, A SCORE TO SETTLE, a story of revenge in the Old American West. Please welcome Mike Torreano! 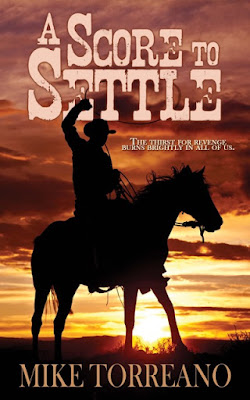 Broken after his family is murdered, rancher Del Lawson signs on to a cattle drive along the Goodnight Loving trail in 1870, unaware he's still in danger. When he falls for a pretty Army nurse, the killers target her.

If he's to recover from his grief and build a new life, Del must set out on a gritty hunt for the men who are hunting him.

Meanwhile, Del's mother, Maybelle, doesn't know her son survived that murderous night. When she discovers the gold the killers are after, she uses the treasure in an elaborate masquerade to take the murderers down.

When he wasn’t riding watch, Del spent time with Rodrigo. Somehow, the boy always saw him coming before he saw Rodrigo. They mostly sat together, Del talking while they both whittled. His eyes always seemed to drift to Rose, though. It was cowardly not to say anything more to her than ‘hello’ or ‘good morning’ or ‘thank you.’ He screwed his courage up one night. Cowhands were telling tall tales, no one really paying attention to what anyone was saying. He met her on the way to the chuck wagon. “Rose, I got somethin’ to say to you. Will you walk with me?” They strolled away from camp.

“I’d like to talk to you, too.” She turned to him. “Why do you avoid me? You haven’t said more than a few words to me in the last couple of days. Can’t you tell I need a friend?”

“I’m sorry...but I don’t talk so good when my tongue’s twisted in knots. Stomach, too.”

“What in the world are you talking about, Del Lawson?”

The words spilled forth like the raging river nearby. “I haven’t felt much of anything since my wife and son...died...a year ago. I been more like an empty bucket with a hole in it.”

“Didn’t want to go on living—tried my best not to, but God cheated me of the easy way out. I figure He must have sent Rodrigo to help me from the depths of Hell. The boy says more than most without talking.”

“No way you could know any of this, and I didn’t feel like talkin’ about it ’til now.” Del’s throat tightened. “It’s taken some time, but I’m givin’ the sorrow free rein, lettin’ it have its way with me. Got an anger buildin’ in the pit of my stomach that’s replacin’ it. Kept it bottled away ’til recent. Went through the last year drunk and numb. Right now, the memories still hurt pretty good. But the pain is mixin’ it up with another feelin’, and that’s caring about you. And I don’t know what to do about that.” 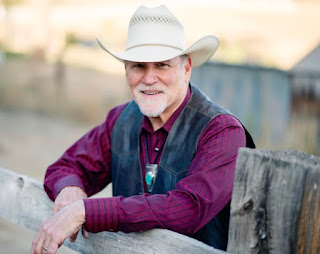 Mike Torreano has a military background and is a student of American history and the Old West.

His debut western mystery, The Reckoning, set in South Park, Colorado, in 1868, was released in 2016 by The Wild Rose Press. The sequel, The Renewal, also in South Park, 1872,was released in 2018. His latest western, A Score To Settle, will be released October 21, 2020, also from The Wild Rose Press. He has a coming-of-age novel, Fireflies At Dusk, set during the Civil War, and his short story, The Trade, a tale of the Yukon Gold Rush, was his first published work in 2014.

Mike’s written for magazines and newspapers for many years. An experienced editor, he’s taught University-level English and Journalism. He’s a member of the Historical Novel Society, Pikes Peak Writers, Rocky Mountain Fiction Writers, Western Writers of America and several other western writing groups. He brings his readers back in time with him as he recreates life in mid-to-late 19th century America. He lives in Colorado Springs with his wife, Anne.