Today I'm welcoming Regency romance writer Lucy M. Loxley to my blog. Lucy has just released her first Regency, Her Humble Admirer. Here's Lucy to tell us a little about one of her favorite characters. Take it away, Lucy! 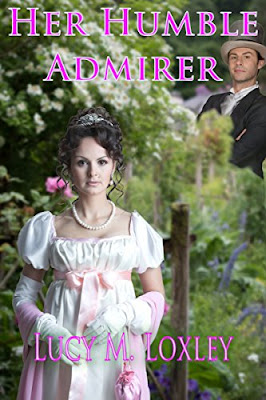 Introducing your hero is one of the pleasures of writing Romance. I find this particularly so in the case of a narrative where there will be a love triangle, as in my Regency novella, Her Humble Admirer.

While the following scene occurs in the first chapter, it is one of my utmost favorites. It began as a fan-fiction prompt for my Sunday-night writing group that soon turned into much more.

“Just James?” She relaxed into the divan.

“Well, isn’t that a fine welcome for a dear old friend?” But his voice smiled as he sank his lanky frame into the chair opposite. He nodded to York, who pulled the door closed behind him once more.

“To what do I owe this mighty, mighty honor?” she teased, hearing the paper crinkle under her gathered skirts and trying not to move, lest he notice the hidden missive.

“Check on me? Whatever for?”

“With your bosom bow become Mrs. Morgan so lately, I figured you might be wanting for company. Isn’t Wednesday her call for tea?”

“Don’t remind me.” She allowed her disappointment to sound in her voice.

“Dear friend, it is just as I thought.” He leaned forward and a strand of his dark hair fell across his high brow. “Our Livia is lonesome, and this incipient deluge is simply not helping.”

Piqued, she sat straighter in her chair, “I most certainly am not lonesome. It’s this dreadful weather. That’s all it is.”

“Oh, the rain. Just the rain, is it?” His green eyes sparkled. “Not even a wee bit…wanting for company, then?”

When I initially wrote this scene, there was a lot of exposition and descriptions of the grand home, some of which I kept, but what interested me most was what I love about Jane Austen novels: the witty repartee between old friends.

I recommend quickly flowing dialogue as in this scene which establishes Livia’s personality as well as her connection with James Dorchester.  As in real life, the friends jump lightly and with few if any transitions from one thought to the next.

I also interspersed body language for both characters. Within the first few pages, readers learn about James, his affection for his longtime friend, as well as the upcoming conflict: an out-of-town dandy and a secret admirer who has sent a letter that Livia doesn’t feel like sharing yet. So much so that she tries to hide the evidence, a defensive move that underscores the tension and excitement of this inciting incident.

Livia Hightower is more than a little intrigued when the morning mail brings a most unexpected delivery.

Dearest Livia,
The call of the nightingale is but a sorrowful, plaintive psalm
Next to the sterling hue of my lady’s eyes, gazing mine.
It is signed simply Your Humble Admirer.

Again and again similar notes arrive in the post. Could it be a beguiling coincidence that they coincide with the arrival in the neighborhood of handsome Mr. Framingham? Surely Livia's childhood friend, James, would never indulge in such romantic behavior, especially when he openly distrusts whoever is sending the tender missives.


With each new note, Livia becomes more convinced that her future lies with the sender. If only she could learn who he is...

Once upon a time, Lucy M. Loxley was an English major at a small liberal arts college. Her favorite classes were Brit Lit and Women Writers of the 18th and 19th Centuries, where she encountered Jane Austen and the Regency period and promptly fell in literary love at first read. Since then, she’s taught high school and college (writing and history classes), studied photography, and significantly expanded her book collection.  She lives in the Mid-Atlantic but dreams of a pilgrimage to Austen’s haunts one day soon. Her Humble Admirer is her first Regency.
Posted by Jana Richards at 12:30 AM