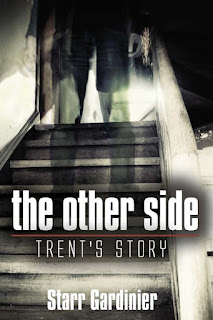 Starr Gardinier is making a return visit today to Journeys with Jana. She's here to talk about the sequel to The Other Side - Melinda's Story. The Other Side - Trent's Story released January 22, 2016.

Melinda James is finally out of Skyview Haven—an asylum where she was confined for years—and is living her life, free at last. However, things are not going as planned; harassed by unexplained paranormal experiences, she doesn’t feel safe in her own home. And when she turns to her best friend Trent for help and support, she is surprised to find her feelings for him have grown far beyond a simple friendship.

Trent Miller isn’t prepared to fight evil, but he will do whatever it takes to save Melinda from an evil entity that is seeking revenge for past events. Armed with knowledge gleaned from television shows, a team of paranormal investigators, and the prayers of family and friends, he is ready to face anything.

The question is, does he tell her about his feelings for her before or after he fights a battle with evil for Melinda’s very soul?

“Melinda, what are you looking at?”

She doesn’t answer, so I repeat my question.

She finally looks at me and says in a voice not hers, “You will pay for your father’s sins.”

I’m so shocked I almost fall over. Her voice…its voice…whatever...sounds like a man’s and it definitely sounds mean.

“You will die,” the voice says.

My mouth is hanging open and I’m unable to do anything but stare at Melinda…or whoever or whatever has taken over her body. I glance around the room to see if another spirit is present. My heart is beating rapidly and my insides are shaking. My hands are trembling and my fingers are cold and I’m having difficulty breathing. I want to run from this room, but know that’s the last thing I can do. It takes me a few minutes to realize that something must be possessing Melinda. I try to call out again to her, but can’t find my voice. I have to do something. I finally find the floor beneath my feet and quickly dart the few steps to her bedside.

“Die,” it whispers and Melinda’s hands reach up to my throat. 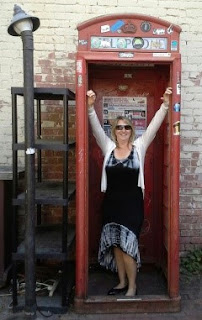 A paralegal by day, Starr Gardinier is an author by night. Apart from being an award winning author for her short story “Cut,” Starr has appeared in a blaze and made her mark on the literary world with her Ivanovich series and now her Other Side series.

Having studied and obtained her Bachelor’s Degree in Literature/Creative Writing, she has found her unique style and is known for her works' distinctive voice, making every character stand out.
She’s the founder and owner of Editing by Starr. She’s also the former executive editor for Suspense Magazine. She has been interviewed in the newspaper and on the radio with relation to her fiction work. She has been a co-host on Suspense Radio.

Starr is a member of International Thriller Writers (ITW) and of Sisters in Crime, Los Angeles Chapter and nationally. She has won three Best Speaker awards as well as Best Evaluator at the Voice Ambassadors chapter of Toastmasters. She has always been active in events. As co-chair and main coordinator for the West Coast Author Premiere, she arranged weekend-long events to help authors from all over network, learn and share their work with the public. Starr has also been instrumental in compiling authors and planning a local author event at Barnes and Noble in Ventura, California along with the store’s event manager.

Please see more on her editing service at www.editing.queenwriter.com, read more about her at www.QueenWriter.com, and/or visit her blog at www.qw-blog.blogspot.com.
Posted by Jana Richards at 12:30 AM

Email ThisBlogThis!Share to TwitterShare to FacebookShare to Pinterest
Labels: paranormal romance, Starr Gardinier, The Other Side, The Wild Rose Press