Secondary Mondays are all about our favorite secondary characters, like the heroine's best friend, or the hero's brother. They can add humor to a novel, and provide a sounding board for the main characters. They can fulfill the role of a character's conscience, and be the voice of reason. Or maybe they provide temptation and try to lead the character astray. Maybe the secondary character is a villain. Whatever role they play, a good secondary character always adds something necessary to a book. And sometimes, if they're really good, we'll write them their own story!

K.K. Weil is here today to talk about one of the secondary characters from her book SHATTERPROOF. The father of her main character Griffin sounds like a piece of work! Take it away, K.K.! 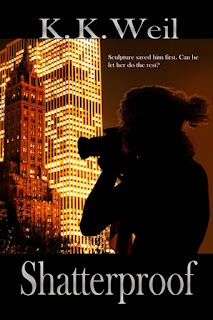 Thanks so much, Jana, for having me here today! I love the idea of Secondary Mondays!

Appearances matter. At least in fiction. Whenever I read about a character, I get a visual in my head as soon as the author begins describing him. Whether it’s the physical characteristics or the way the character dresses, how he looks says a lot about him. Sometimes, it says everything.

Very few people get to know the real Griffin Stone in my new novel, Shatterproof. He keeps most people at an arm’s length and his appearance doesn’t invite questions. Griffin is a mess. His clothes look like they were grabbed off a floor and thrown on haphazardly. They may or may not match. He’s got a scruffy beard that he only trims when he has to meet with clients. And the fact that he’s all tatted up doesn’t help any.

Griffin is a sculptor. Most people assume he looks the way he does because art is his only priority. That he’s got no time or interest in working on his appearance. That he even considers it beneath him.

But looks can be deceiving.

In reality, Griffin’s appearance is carefully cultivated. All his life, Griffin grew up witnessing domestic violence in his house. Griffin loathes his father for hurting his mother. He dedicates his life to protecting and taking care of her, as well as other abused women. But he has been cursed with his father’s handsome, yet dangerous, face. To make matters worse, his parents insist that Griffin’s dark and passionate nature is a mirror image of his father’s. Griffin’s deepest fear is that he will turn into his father, and repeat the cycle of abuse. Any comparisons to the man enrage him.

He may not be able to change what blood runs through his veins, but he can change what people see when they look at him. And so, Griffin creates an image of himself that is a sharp contrast to his father’s. While his father is polished, Griffin is anything but.

It also gives Griffin some rare satisfaction to keep himself this way.

He hates that I can take the beauty he has and destroy it. It gives me pleasure to know I can irritate him. Because after all, he destroys the thing that should be most beautiful to me.

For Griffin, that in itself is a powerful motivator.

When Griffin meets Frankie, the heroine in Shatterproof, she realizes there is a beautiful man hiding under the façade of bad clothes and unkempt facial hair. She just has to get Griffin to realize it, too.

Sometimes, when I read about a character, it’s his gorgeous, flawless appearance that really helps me fall in love with him. Other times, it’s the exact opposite.

*Sculpture saved him first. Can he let her do the rest?*

Griffin Stone knows the stats. Sons of abusers become abusers. This is his single fear.

After witnessing firsthand his parents’ tumultuous marriage, Griffin worries that he, too, harbors an explosive dark side. Can he escape from his father’s rage-fueled ways or is he destined to become part of the cycle?

Unable to persuade his mother to leave and wrestling with his resentment towards her for staying, Griffin volunteers at Holly’s House, a safe haven for abused women. Through sculpture, Griffin gives these women pieces of themselves they’ve long forgotten. Holly’s House is the only place where Griffin finds peace and purpose.

Until he meets Frankie Moore.

Frankie is an aspiring photographer, finding beauty in things most people miss, including Griffin. Griffin is attracted to her free-spirited, sassy attitude but fears Frankie will trigger the most intense part of him, the one he must keep buried.

Frankie’s got to get her act together. At 23, her anything-goes behavior is leading nowhere fast. She’s hopeful that her latest hobby will be a building block for the future. But when a stranger appears on the other end of her camera, looking as complex as he is handsome, Frankie thinks this might be just the change she needs.

“You need to grow up, Griffin,” my father spat at me. “Life isn’t perfect. You need to get over it and move on. Your mother can. She’s happy with me and whatever we have between us is our business, not yours. Grow the hell up, and start acting like a man instead of a petulant child.”

My father broke into a smile. An evil, condescending, terrifying smile. “You think you’re so different from me?” He hovered over me. His tone was sinister, as if he was trying to cut through my skin with nothing but his voice. “Get up.” He yanked my arm and pulled me by the elbow into the bathroom.

He grabbed the back of my head and forced me to face the mirror. “Look at yourself, Griffin. And look at me. Everything about you comes from me. You may deny it now. You may put yourself on a pedestal, thinking you’re above being human, but just know that the fire inside you, that’s my fire. That passion, it’s mine. And when you have an uncontrollable desire to love, to hurt, to possess a woman, it’s from me. Nothing is yours alone. Even this face.” He snagged my chin between his strong fingers. I tried to yank it away from his grasp, but he held on too tight. “It’s mine. And there’s nothing you can do about it. You can try to mask it in this mess of hair and clothes and tattoos you have going on, but know that every time a woman falls in love with that face, every time she says she can’t resist you because of it, every time she can’t walk away from you…it’s because of me. It’s because you are me. We. Are. The. Same.” He released my chin with a shove and left the bathroom. 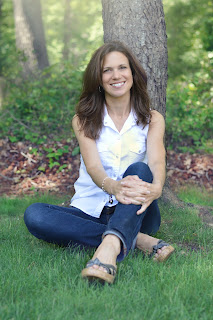 Instead of telling you how I’ve always loved to write (which is true) or how I dabbled in different genres for years while I was a teacher, before I took it up full-time (also true), I’d like to let you get to know me a little.

I love trying all different foods. I enjoy everything from street meat to decadent delicacies. When I travel, I pester the locals for restaurant recommendations, off the beaten path. Having said that, I am a savory fan. I don’t have a sweet tooth. I’d much rather have another bite of dinner and one more glass of wine that save room for dessert. There is one exception to this rule. Reese’s peanut butter cups. Sometimes I think I love those more than I love my children. I’m kidding. Maybe.

I’m left handed. I blame my horrendous handwriting on this, even though I don’t really believe they’re related. Everything in this world is built for and by righties. (Ever try using a can opener with your left hand?) So when I meet another left-handed person, I feel an immediate bond to her, like we’re in this special club. A club founded on being inconvenienced. When I was young, I was desperate for my sister to be a leftie like me. So even though she grabbed things with her right hand, I’d quickly switch them to her left. Now she’s ambidextrous.

I always save the best of everything for last. It’s a compulsion. I don’t like pizza crust very much, so I eat it first. I tear it off, piece by piece (I don’t bite the slice backwards. I’m not a Neanderthal, for God’s sake), until there’s just a little bit left in the center. I use this as a handle.

I have an irrational fear of lice, bedbugs and any other insect that can become an infestation.
I prefer beaches over grass, heels over flats, dramas over comedies, coffee over tea, night over morning and fall over spring.
Posted by Jana Richards at 12:30 AM