Consent is Sexy by Cecilia Tan 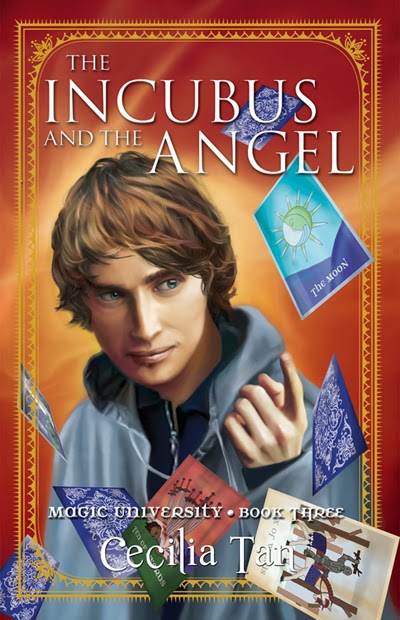 Consent is Sexy: So is Pushing the Boundaries
by Cecilia Tan

I think consent is sexy. One of the things that turns me on the most, both in a lover in my real life and in the books I like to read and write, is communication between partners. Consent is about negotiating likes, wants, needs, and boundaries between lovers. Finding out how the key fits into the lock, the magic fit between the two main characters, is the key to any romance novel and I love to see how people get there.

That said, many people struggle with the idea that fantasies of being taken by an unstoppable male erotic force is okay. I grapple with this issue in THE INCUBUS AND THE ANGEL, the third book in my Magic University series. In the book, one of the subplots is that many of the female characters are being visited in their dreams by an "incubus," a demon lover who may be "only a dream" and yet leaves many of the women feeling deeply affected. Some feel violated, others yearn for an incubus-like lover to find them in real life, and every other reaction in between. I knew it would be a bit tricky to present male desire this way in a romance novel, but I felt it was important to recognize that not all women dream of being in a historical romance novel or even a 50-shades-style power relationship.

The whole incubus subplot for me was a way to contrast the unstoppable dream lover with the way our characters conduct themselves in real life. Sexual magic is our hero Kyle's strength, and when he agrees to have magical sex with a female friend to help her with her homework, he's scrupulous at negotiating what the boundaries and rules of their interaction will be. Of course, the boundaries begin to shift as he and Lindy's feelings for each other grow... But Kyle is also strongly attracted to a male student he has performed sex magic with, a student whose boundaries are zealously guarded. I can't tell you what happens without spoiling the book, but it's all part of exploring the theme of boundaries, and what can happen when those boundaries are crossed.

Because although consent is sexy, pushing the boundaries in fiction is, too. I like to play with that ravishment trope as much as many romance writers, I just come at it from a slightly different perspective.

Since his arrival as a freshman at Veritas, the hidden magical university inside Harvard, Kyle Wadsworth has been on a quest for true love. He's had his heart broken a few times along the way, though, and now halfway through his junior year he thinks he isn't ready to love again. He has grown obsessed with studying an ancient prophecy and is still haunted by past events, even in his dreams.

As their romance blossoms, Kyle discovers perhaps he can do something about the incubus after all. Is Kyle the hero prophesied in the ancient texts? Whether he is or not, there is one person whose help he must enlist. The one person who wants the least to do with him. The person Kyle sees in his dreams: his old Gladius House rival, Frost.

"The Incubus and the Angel is an entertaining read that has a similar magical world structure as the Harry Potter books, though these tales of magic definitely aren't for children. Kyle is a strong hero but with a touch of femininity which helps him relate to Lindy in ways an alpha male type couldn't. He's been hurt emotionally, but willing to keep searching for his soul mate. I like that resiliency about him."--You Gotta Read Reviews

"If you want a book about students practicing magic and sex, this is definitely the one for you."
--Erotica Readers Association

She lives in the Boston area with her lifelong partner corwin and three cats. Find out more at www.ceciliatan.com or follow her on Twitter at @ceciliatan.
Posted by Jana Richards at 12:30 AM