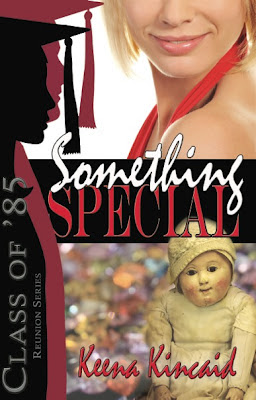 My guest today is Keena Kincaid, fellow Wild Rose Press author and fellow alumni of the Class of '85. Keena has written the last book in the series. I'm sorry the series is ending, but I'm looking forward to reading Something Special. From the excerpts I've read, it truly sounds like, well, something special. Here's Keena to tell us all about it.

Smart is sexy—even with a pocket protector

The heroine of my new book Something Special could be the love child of Sheldon Cooper and Tara Reid.

Jane Grey—named after the ill-fated English queen—is a woman who observes first, weighs her options, and then formulates a plan of action. So naturally the hero, Andrew Morgan, baffles and beguiles her with his tendency to act first, then think about it later if at all.

Jane is the sole survivor of a horrific crime. Her grandfather murdered her mother and grandmother with an ax—an evil she witnessed and managed to survive. She’s broken when it comes to relationships, but she’s still strong, is very successful professionally and is determined not to be pitied.

Given her Sheldon Cooper-like intelligence, it seemed obvious that she retreat to a place she could understand. Math and science have rules that human relationships don’t have. 2 + 2 always equals 4 but love and promises don’t always equal happily ever after. Sometimes, they lead to death and destruction without reason.

She sees the world as it should be—and as it is. Jane acknowledges this contradiction and yet retreats from it. The results are, in my opinion, one of the strongest yet most vulnerable characters I’ve created.

On the other hand, Andy had a childhood Norman Rockwell couldn’t have made better: Gentle, understanding parents, a stay at-home Mom and a minister father. A fun-loving, loyal younger brother. Living on a farm that had been in the family for generations. While he’s not reckless, he doesn’t spend a lot of time weighing outcomes before taking the plunge. A secure childhood gave him the belief that he’d always land on his feet.

Flipping on the radio, Jane leaned back as a mellow guitar beat floated out of the speakers, followed by a voice singing of “bad things” and making her think of sultry nights, rough sex and Andy. She turned the dial. “How long before we reach Lyons?”

“It’s the next exit.” He checked the rearview again.

“You act as if we’re being followed or something?”

She arched her brows. “That’s what you get for driving this fast.”

“What if they are following you?”

“So is time travel. ‘Is it probable?’ is the better question.”

“That’s me. The brainiac who ruined the curve for everyone else, according to Jenny Sanderson.”

“A Barbie Doll would blow the math curve for Jenny.” He checked the rearview mirror again then slid into the exit lane for Lyons. “Besides your research into A.I., do you do anything else at NASA?”

“Analyze data, review photos and determine the risk ratio of exploring a new area and how best to lower that risk.”

Barely slowing down, he turned right toward what looked like the historic part of town. “Why bother? Isn’t just being on Mars risky enough?”

“That’s why I do it. The public hates failure.”

“Failure is part of life.”

She sighed. How often had she heard that? “Failure is inexcusable.”

His mouth twisted in a slight scowl. “Is that what your boss says?”

“No—” My grandfather, she almost said, but stopped herself. “It’s just understood. My team finds the line between cost and risk. We make sure success isn’t too expensive.”

“Precisely.” So why did it suddenly sound so lame?

All about Keena
Author Keena Kincaid likes to say she writes romances in which passion, magic and treachery collide to create unforgettable stories. The truth is she’s usually kidnapped by tall, handsome men, who are totally into someone else, and held hostage until she helps them win the woman of their dreams.

Most recently, she’s matched Jane Grey, a risk analyst at NASA, with Andrew Morgan, a small town detective conducting a high-stakes investigation into local corruption. Jane is unable to see beyond her scarred past to a future with Andy, but he knows they will have something special—if he lives long enough to convince her to risk her heart.

Keena's blog - Typos and All

Buy links
http://www.thewildrosepress.com/index.php?main_page=product_info&cPath=175_140&products_id=4759
Posted by Jana Richards at 12:15 AM