I've Got a New Cover! 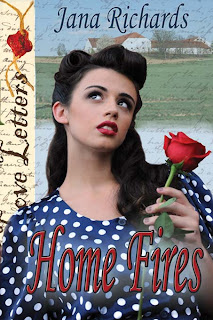 Hot off the press from my editor at The Wild Rose Press, may I present the cover of my next release, "Home Fires"! Here's a blurb:

I've wanted to write a story about a war bride for a long time, and with "Home Fires" I finally got my chance. At 25,000 words it's the shortest novella I've written so far, and I found that length a real challenge. But I hope Anne and Erik's love story is one readers will connect with.

"Home Fires" is part of a new series from The Wild Rose Press called 'Love Letters'. Every book begins with someone getting a letter that changes his or her life. In my story, Anne receives a letter from her fiance telling her he's married someone else. This letter definitely changes the direction of her life!

No word yet on a release date. Hopefully, I'll find out soon!
Posted by Jana Richards at 7:30 PM