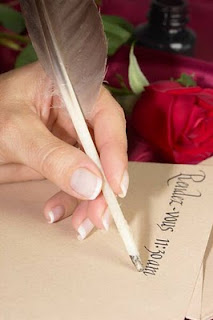 When I sold my first book, my publisher asked me if I wanted to write under my own name or a pen name. I thought about it for a while and decided I wanted the privacy that a pen name would give me. If at some point I wanted to write non-fiction, like magazine articles, I could still do so under my own name.
I probably didn’t think as carefully as I should have before choosing my pen name. For instance, I discovered a writer with a very similar name at one of my publishers, and there’s an obstetrician in Chicago named Jana Richards. I probably should have done some research, and maybe written this article before I made my decision. But better late than never. If I decide in the future that I need another pen name I’ll be prepared!
So, when should you adopt a pen name?
According to Vicki Britton in her article “When to Use a Pen Name”, you might want to consider a pen name if you have a hard to spell or pronounce name, or if your name evokes unwanted associations. “If your name is Lieverwich Kowazinsky it would be wise to shorten it to Larry Kowan or something readers could readily remember and spell. If you write romance and your name is Ima Hogg it might be best to assume a name that conjures up a more pleasurable image.” The same is true if your real name is the same as another famous writer or an infamous person, such as a serial killer.

If you’re writing in a field mainly dominated by members of the opposite sex, you probably should use a pen name. For instance, men who write romance generally use female or androgynous pen names. Authors who collaborate on a book will need a pen name. Moira Allen gives the example her article “Should you use a Pseudonym?” of Robert Silverberg and Randall Garrett who collaborated under the name "Robert Randall."
Another good reason for using a pen name is if your reputation in your day job may be affected by your writing. For example, a professor of English literature who writes commercial genre fiction may want to use a pen name to keep her two worlds separate.
Many authors assume a pen name when they begin to write in another genre. In her article in the May 2010 Romance Writer Report, Colleen Gleason, who also writes as Joss Ware and Colette Gale, gives the example of Nora Roberts: “Oftentimes, the name change is a sales and marketing tactic, in order to facilitate a new brand or image. Even Nora Roberts took a new name when she moved into writing the In Death series as J.D. Robb.” Gleason says that when she changed publishers and genres there was “an obvious reason to change… Avon wanted to release my series fresh and as a debut.”
A mid-list author or an author previously published with a small publishing house may be asked to take a pen name when she receives a new contract with a big publisher. Sometimes the best thing to do is to wipe out the old track record and start over, in order to establish a new and bigger brand.
When is it not a good idea to use a pen name?
If you want a pen name because you don’t like your own name or you want something more exotic, it’s probably not a good idea. Editors aren’t impressed by cutesy pen names. Worse, a bad pen name may make you appear amateurish, and you run the risk of not being taken seriously by editors and agents. In her article “How to Choose a Pen Name” Jamie Hall related this story:  “On a writer's bulletin board I frequented, one writer was talking about adopting the pen name "Rogue Storm." This is a prime example of a name that is too showy. Fortunately, many other members of the board soon told this writer to skip it (one biting comment said "Rogue Storm is fine... as long as you're two different X-men at the same time").”

For the most part, these days there is no reason to change your name because of gender or ethnicity, although Moira Allen writes that this decision is best left to the individual writer and his/her experiences.

If you don’t want to use your real name because you don’t want your family or co-workers to know you’re writing about them, you need to know that writing under a pen name doesn’t protect you from charges of libel or slander. And if you want to use a pen name because you’re ashamed of what you’re writing, perhaps it would be best to change your writing instead of changing your name.

How should you choose your pen name?

Jamie Hall gives the following advice in “How to Choose a Pen Name”:


-          Choose a pen name that is easy to remember and spell and doesn’t have too many syllables. She suggests a first name with two syllables and a last name with one syllable.
-          Choose a last name in the first part of the alphabet. Hall claims that most best-sellers don’t have names that end in N-Z. However, there are exceptions to every rule. Nora Roberts comes to mind.
-          Check out the name you’ve chosen on Amazon.com to make sure someone isn’t already using it, or something similar. You might want to search Facebook as well. That’s how I found out about the obstetrician in Chicago. Do a Google search. If it’s too common a name Google may put you well down the list.
-          Try out a pen name on the Internet for awhile. Hall said she tested out a previous pen name in chat rooms, and found that people were not only getting the spelling wrong, but they were confusing her with a famous actress with the same last name. She eventually had to abandon that pen name, but at least she wasn’t stuck with it forever.
Do you use a pen name? Have you ever considered adopting one?
Posted by Jana Richards at 12:35 AM