I'm excited to welcome my friend Liz Flaherty to my blog today. Liz has a new book releasing today from The Wild Rose Press. I can hardly wait to read THE HEALING SUMMER. It sounds like the wonderful kind of emotional read we've come to expect from Liz Flaherty. Take it away, Liz! 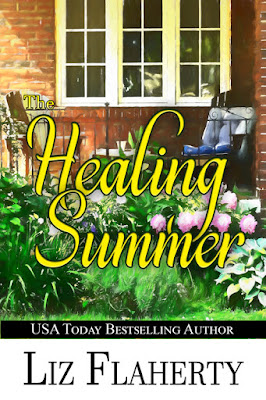 When I’m asked which is my favorite of my own books, I generally say it’s the one I’ve just finished, and that’s true. My emotions are still roiling around in those pages and I’m still feeling odd about saying goodbye to those protagonists.

It’s also true that there are favorite scenes from every book, most beloved characters from each one, and places that years later I still remember—not just their names but how they felt. Like the Cole-Porter-titled businesses in the Lake Miniagua Series, the River Walk in The Debutante’s Second Chance and Jar of Dreams, and Peacock, Tennessee. Peacock was the setting of One More Summer, the story that took me ten years to sell.

It’s also the one that to this day has the strongest hold on my heart. I’m not going to say why—even if I knew for sure or could put it into words; books you love or don’t are your choice, not the author’s. But after One More Summer came out in 2012, I wrote a sequel to it. Not because I wanted to, really, but because the story was waking me up at night with unreasonable demands. (That sounds goofy, doesn’t it? But it’s very close to the truth.) And then it took five years to sell.

And on October 30, The Healing Summer is being released. Thanks to Jana for having Carol, Steven, and me here today. I hope you love their story as much as I do.

About the book: Will the chill of fall cool off a summer romance?

When Steven Elliott accidentally rides his bike into Carol Whitney's car at the cemetery, the summer takes on new and exciting possibilities. Long friendship wends its way into something deeper when their hearts get involved. Feelings neither of them had expected to experience again enrich their days and nights. But what happens when the long summer ends? When Carol wants a family and commitment and a future, Steven isn't so sure. He's had his heart broken before—can he risk it again?

Excerpt:
“Were you hunting me?” She should have waited to get her breath back—she sounded like a vamp from one of 1940s movies that were on really late at night when you couldn’t sleep. “When we met on the road, I mean.”

“Huh?” He sounded nonplused, and she felt like cheering. She wasn’t the only one who’d been kissed stupid—he wasn’t doing so well, either. “Oh, yeah.”

“Yeah?” She turned away, starting to put away the abandoned groceries. If she couldn’t see him, she would neither hyperventilate nor jump his bones. Maybe.

Want to what? That? Did she want to? Hell, yes, she wanted to. But they were just barely aware of each other, and he was going back to his big city life and big city friends in a matter of weeks. Although he’d probably spend some weekends at Miss Abigail’s and possibly even open an office in Peacock the way he’d mentioned, he wasn’t good relationship material.

Even more, in Carol’s mind and she thought probably in his, he was still Promise’s. The thought sobered her and stilled her hands. Oh, Promise.

“What did you…why did you want me?” she asked, trying to insert some sense into the conversation, some mental cold water on her still-shrieking girl parts.

“Dinner.” He pulled his hair back into a band he took from his pocket—he never seemed to run out of ponytail holders. “Would you like to go to dinner? And shop for cars? I know you’re not going to the beach this summer, but I’ll buy you a girly drink with an umbrella in it and you can pretend.” He ran a finger lightly down the strap of her dress. “You can wear one of these dresses, although probably not this one, since I seem to have decorated it with sawdust and sweat. Oh, wait.” He held up both hands to stave off an answer. “Grace told me it was rude to suggest someone wear something in particular, so I take that back. Wear whatever you like.”

“When and why did Grace tell you that?” She refilled their tea glasses and handed him his. She took a long drink, hoping the cold brew would serve to cool down her insides.

Well, that wasn’t working—she was pretty sure she felt them sizzle.

“Thursday. She was going to afternoon tea over at the Old Farts Home, something they’ve apparently decided to have every Thursday. You stay for it, too, don’t you, after you get their hair and nails all prettied up? Anyway, she had on her overalls, complete with grass-stained knees, and I said, very politely, ‘Holy shit, Grace, are you wearing those?’ She didn’t respond well.”

Even if she could have resisted the hormonal storm that had overtaken her kitchen, Carol had no defense against his laughing dark eyes. “Okay, thanks. I’d like to go to dinner. And you’re sure it’s all right if I wear whatever I please?”

His gusting sigh should have made the kitchen curtains stir. “Yes. Fine. Can I use your phone to call Dillon and ask him to bring my truck up the hill?”

“Sure, or we can walk down if you’d rather.” Carol was surprised at how much she was enjoying the walking these days, especially when it was downhill.

“No.” She grinned at him. “But you have to take a shower. I do have some standards on dates.” She gasped as soon as the words left her mouth. “I’m sorry. I know this isn’t a date. We’re friends who kissed…accidentally. This is dinner, not a date. Right?”

He smiled, a slow and lazy expression that turned her stomach over. And over again. “Wrong.” He came over and kissed her once more. Thoroughly. “It’s a date.” 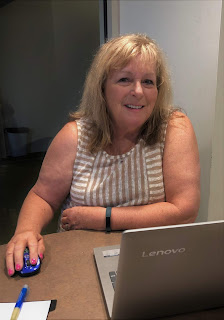 Retired from the post office and married to Duane for…a really long time, USA Today bestselling author and fellow Word Wrangler Liz Flaherty has had a heart-shaped adult life, populated with kids and grands and wonderful friends. She admits she can be boring, but hopes her curiosity about everyone and everything around her keeps her from it. She likes traveling and quilting and reading. And she loves writing.