Linda Nightingale joins me today to talk about her love for a horse named Bonito and about her newest book from The Wild Rose Press, SINNER'S OPERA. Take it away, Linda! 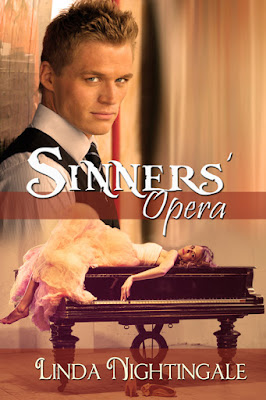 Sinners’ Opera is my latest book from The Wild Rose Press and is now available. In SO, the hero, Morgan D’Arcy, owns an Andalusian stallion kept at his ancestral estate in Devon, Royal Oak. As you might have guessed, Morgan is an English lord. Also, he is a concert pianist…and a vampire.

I’d like to tell  you about my experience with the magnificent Andalusian horse. I know Morgan would approve since he dearly loves his stallion and mentions him often in Sinners’ Opera. So...

In 1980, the year my oldest son was born, I discovered the Andalusian horse. Like a poster on my wall says, ‘this horse will change your life’.  We were breeding the Arabian at the time had garnered some success in the show ring.  But when I saw the magnificent Andalusian horses, I fell in love and immediately started liquidating my Arab breeding stock to purchase an Andy stallion.

If I were playing the piano with my first lesson, I’d try to sit down and play Liszt. As usual, I bought a young horse who knew more than I did. I looked all over the country for a THE horse I wanted.  I planned for him to be high-schooled (the Andalusian is gifted for the baroque moves—passage, piaffe, lateral work and pirouette, and the airs-above the ground).  I received a call from a breeder in Virginia saying that I needed to come see a  young stallion named Bonito.  I didn’t want him because he was young and unfinished, but he did have a lot of the moves on him at 4 (a mistake I later learned).

But I went to beautiful Middleburg, Virginia to look at Bonito.  In the indoor arena, I fell in love with a white fairytale stallion named Afamado, but he wasn’t for sale.  Then they showed me Bonito. He put his head over the Dutch door, taking my heart with one glance.  He was a rose-gray with a black mane and tail, both thick and long.  His neck was a majestic crest like a carousel horse.  I bought Bonito and never looked back.

Bonito had been imported from Costa Rica.  My hubby and I later went to the National shows in CR and were treated like queens and kings. I also began to broker horses for Bonito’s breeder in this country.

We bred Bonito to mares of various breeds, and consistently he produced offspring of his quality. The Andalusian is gentle enough to breed the stallions in the morning and put him in the show ring that afternoon, without requiring a professional trainer to behave with other horses.  He was mischievous and a bit of a handful but always kind.  We entered the show ring with a vengeance. At the time, the Andalusian was a rare breed in this country and we wowed the crowd everywhere we went.  I did exhibitions in the long lines, parades in the long lines (you have a line each side of the horse and walk very close behind him).  His beauty and agility won him many admirers as well as his sweet temperament.  I could put a child on him and he was a plow horse,  but let me put a foot in the stirrup and he was all fire and show.  He knew he had a fan club.

I showed him at two National Championships in Halter and many championships in various classes.  I then began to show dressage and perform musical freestyles, but our best luck was in performing exhibitions at horse shows.  We had a routine to Phantom of the Opera, and I wish I had that on tape, but sadly I can’t find the old VHS to transfer it to disk.

When I was going through my divorce, I’d go to the barn and cry on his neck.  He’d fold that lovely neck around me and hug me while I cried.  I daresay he was my soul mate.

If you’d like to know more about the Andalusian or the high school movements, leave a comment with a way to contact you, and I’ll be glad to send you an article I wrote for a breed magazine and info on the upper level movements.

Everyone who met Bonito loved him.  Even today, twenty years later people remember him.

Morgan D'Arcy is an English lord, a classical pianist, and a vampire. He has everything except what he desires most—Isabeau. As the Angel Gabriel he's steered her life and career choice, preparing her to become Lady D'Arcy.

Many forces oppose Morgan's daring plan—not the least of which is Vampyre law. Isabeau Gervase is a brilliant geneticist. Though she no longer believes in angels, she sees a ticket to a Nobel Prize in Gabriel's secrets—secrets that have led her to a startling conclusion. Gabriel isn't human, and she fully intends to identify the species she named the Angel Genome. Morgan is ready to come back into Isabeau's life, but this time as a man, not an angel. Will he outsmart his enemies, protect his beloved and escape death himself? For the first time in eternity, the clock is ticking.

“Are you a bum?”  She cocked her head, one eyebrow arched.

“Do I look like a bum?”  I’d dreamed of changing the world.  How the Mighty fall.

A bitter laugh burned my throat.  “Hold on to your dreams.  Dreams do come true.”  My hand shook, and I almost dropped the wallet engraved with my initials and the St. Averil crest—worthless reminders of a life left behind.

“Come closer.  I won’t harm you.  I promise.”  I folded the sodden currency and shoved it into her hand.

“The money is mine.  Now it’s yours.”  Thinking of a special little girl I’d taught to dream, I smiled wistfully.  “I must warn you.  Princes are in short supply.”

“You are an angel,” she whispered reverently.  “Grandma said angels didn’t always look like angels when they appeared to you.”

A sharp pain lanced my heart, sadness welling deep inside.  “I’m not an angel, child.  Run along home before you catch a chill.” 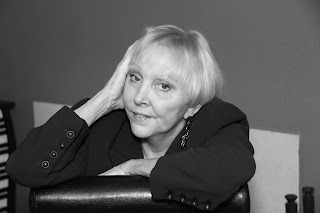 After 14 years in Texas, Linda just returned home to her roots. She has seven published novels, four of which are available from Audible.com in audio. For many years, she bred, trained and showed Andalusian horses on their farm in Five Forks. So, she’s seen a lot of this country from the windshield of a truck pulling a horse trailer. She retired from a career as a legal assistant at MD Anderson Cancer Center to write full time. She has 2 wonderful sons—one in Texas; one in England—and 4 equally marvelous grandchildren. She loves horses, sports cars, music, and piano, and enjoys dressing up and hosting formal dinner parties.