I'm pleased to welcome Vicky Burkholder to Journeys with Jana. Vicky is here to talk about her new release from The Wild Rose Press, REVENGE AMONG THE STARS, a sci-fi romance. Thanks for telling us about your new book, Vicky! 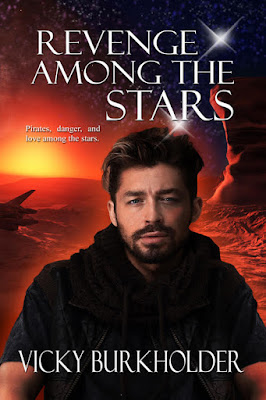 Aleksia Matthews is left for dead, after space pirates attack her ship and kill her brother. She swears to avenge his death but knows she can't do the job alone. After taking out an ad for a bounty hunter, she weeds out the bad from the good, and one man stands out. He could be the perfect partner—and that scares Ali more than the pirates do.

Special agent Jason Cole is tracking the pirates who killed his family, but he's always one step behind. There have never been any survivors—until now. He needs Ali to identify the attackers, but she proves to be stubborn. She plans to go with him on the hunt, and he's determined to keep her safe.

While Cole and Ali seek revenge, someone at headquarters would like to see them fail. Together they battle explosions, their emotions, and danger from one of their own.

She risked a glance at Jason and the other man. They were both out cold. “That’s it, then. We go by water.”

“Ali, it’s too dangerous,” Sami protested as a laser flare lit up the area in front of the rocks. “The sled’s been damaged.”

“I don’t have much of a choice, Sami. They haven’t seen me yet, but they will soon, and I don’t
think this baby can take too many of those crystal hits, can it?”

A very reluctant “no” issued from the speaker.

“Ali, you can’t be serious. The odds of you surviving in such turbulence are beyond my capabilities to compute.”

“Sami, either help me or shut up.” She lifted the sled out of the rocks and took a perpendicular line to the river. A minute after she left the safety of the rocks, a flare lit them up, and she blinked against the sudden glare—momentarily blinded. The sled bounced as she scraped against a low rise, staying on course by instinct alone. As she reached the river, another flare burst, lighting her for the pirates to see.

“I’ve been spotted, Sami.” Ali killed the night vision and turned on her running lights as a beam
whizzed by her port side. She gulped at the sight of the raging torrent but headed into the dubious safety of the water. Hopefully, the roiling water would dissipate some of the power of the beams.

“Baby, I sure hope you’re watertight.” Ali crossed her fingers as she dropped the sled into the water. 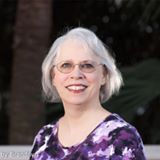 Vicky has been married forever to the one person who accepts that she lives in a fantasy world most of the time. She's even been seen at the beach building worlds for her stories. In addition to creating fun characters, fantasy worlds, and suspenseful situations, she also enjoys and is very good at things like writing policy and procedures manuals and setting up continuity and organizational spreadsheets, both of which she has actually earned money doing. She has a master's degree in library science so likes things organized. Okay, so her family thinks having the spice rack alphabetized it a bit much, but she has no trouble finding what she needs when she needs it. And just because her extensive library is cataloged and organized, that doesn't mean she's obsessive. Honest. When not writing, Vicky can be found in the kitchen whipping up gluten-free, lactose-free, other allergy-free meals. Or watching the world go by from her front porch swing.