Here's one last snippet from my romantic suspense, SEEING THINGS. I hope you enjoy it. Have a happy Halloween! 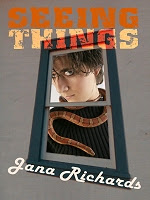 What the hell was he doing? He stopped abruptly, appalled by the direction of his thoughts. How could he even consider such a thing when he was sure she was involved in Jeremy's disappearance?