Claire Marti's debut romance novel is releasing on March 31, 2017 with The Wild Rose Press. This romance writer who teaches yoga (she used to be a yoga teacher who wrote romance) is an interesting person and a talented writer. Please welcome Claire Marti! 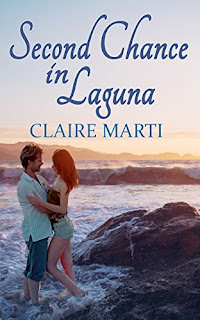 What do you want readers to come away with after they read Second Chance in Laguna?

It’s a story about finding the courage to start over after suffering a broken heart. Choosing to release the past, live in the present, and follow your dreams is a recipe for happiness. I want readers to be inspired to find the courage to change their lives if they aren’t fulfilled. To understand it’s never too late to seek happiness.

When were you first published and how did that happen? Was it a long or short journey?

I’ve written numerous non-fiction articles in the yoga and wellness industry. Second Chance in Laguna is my debut novel. I started in late 2014 and began pitching in 2015. I won a few contests and that helped me sign a book deal in March 2016 with The Wild Rose Press.

How did you get started writing romance?

As a child, I found my mom’s stash of Kathleen Woodiwiss and Rosemary Rogers novels. Reading those sealed my fate!

None! Second Chance in Laguna is my first novel. I do have characters, outlines, and some scenes written for a women’s fiction novel set in 1920’s Paris and Antibes. I’m working up the courage to dive into it.

I’ve got the musical taste of a teenage boy from the 1990’s. Alternative rock, heavy metal—front row for Soundgarden, Foo Fighters, Muse, Guns n’ Roses (back in the day.)

I live in Encinitas, California, a sleepy beach town about twenty-five miles north of San Diego. I’ve been writing stories since I was a child. I majored in English at the University of Virginia, practiced law briefly, and transitioned into teaching yoga and writing full-time over the last few years.

I’ve been teaching yoga since 2006. I teach in studios, online, and in clients’ homes. Keeping my mind, body, and spirit healthy complements my writing. I like to say I was a yoga teacher who wrote and now I’m a writer who also teaches yoga.

I’ve got a crazy family and made many dramatic, ahem, romantic choices in my 20’s and early 30’s. Growing up the youngest of six children, having a French father and dual citizenship, working as a lawyer, a non-profit animal rescue director, and a yoga teacher gives me a broad perspective on life.

I’ve got Josie and the pussycats. Josie is a rescue dog—part mastiff and part lab. She’s our gentle giant. Beau is a big sweet black kitty and Lola is our rambunctious tiger cat. My dream is to open my own animal sanctuary and save them all!

I’m working with my editor on revisions to Book Two in the Finding Forever in Laguna series: Brandt and Alyssa’s story. I’m also working on Book Three: Christian and Kelly’s story. 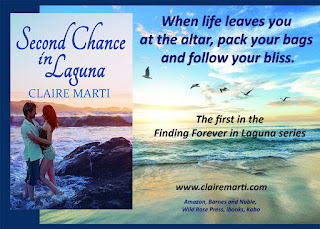 Here’s what Second Chance in Laguna, releasing March 31, 2017 is about:

When Sophie Barnes’s fiancé jilts her at the altar, her carefully planned life implodes. Considering his betrayal to be a rude wake-up call, she leaves everything she knows in San Diego and flees to Laguna Beach. She vows to transform her life by avoiding men for a year and by fulfilling her dream of writing a wildly successful novel.

Sophie’s new landlord, Nicholas Morgan, is a gorgeous, successful architect with a player reputation. Nick’s avoided the intimacy of a long-term relationship—until Sophie’s independence, courage, and beauty touch his guarded heart. Both Sophie and Nick are terrified of being hurt again, but can they resist the pull of true love?

Nick arrived right on time, looking gorgeous in faded jeans and a plain white T-shirt. How did he always manage to start the butterflies fluttering in her stomach? Just by standing there with the setting sun framing him. She was in trouble.

“Hi, beautiful. Ready to go?” He clasped her face in his hands and planted a soft kiss on her lips.

Returning his kiss, Sophie wound her arms around his neck and deepened it. She couldn’t resist. His strong arms wrapped around her waist, hugging her close to his broad chest.

“Mmm, feel free to greet me like that every time I come over.” His lips curved up into a sweet smile.

Heat washed her cheeks, and she returned his smile. “Let’s go. Prepare to be blown away by the movie snack of the century.”

Determined to keep things light and enjoy the movie before “the talk,” Sophie thrust down the lick of panic bubbling in her gut. She’d accomplished next to nothing all afternoon, instead wrestling with whether she needed to tell him about Doug.

The angel on her shoulder whispered to tell him because if they were going to have any kind of relationship, even a friends-with-benefits one, honesty and trust were vital.

The devil urged her to zip it. They’d only known each other a few weeks. What if he lived up to his Player of Laguna reputation and expected only a fun fling? Even though he seemed deeper than that. What if she scared him off with a premature talk?

“Is that a blush? The popcorn à la Sophie is that decadent?” he joked.

After they settled into their reclining seats at the luxury theater, Sophie poured peanut M&Ms into a tub of popcorn large enough to feed a family of four. Nick sampled it, bowing to her genius. They scarfed down most of the tub before the closing credits.

He kept her hand clasped in his, and she lost herself in the dark humor of the film he’d chosen. It seemed normal. Like they were a happy boyfriend and girlfriend without a care in the world.

Afterward, they headed back to her cottage. When Nick parked and walked her to the door, he glanced at her with a raised brow. She appreciated he didn’t just assume he was coming over and getting lucky, although she wished it was so simple.

“Come in. There’s something I need to talk about with you.” Sophie entered the house, working to swallow her jangled nerves. Immediately, Zack appeared at her feet, rubbing against her and purring like a motorboat. His moral support aided her resolve. Oh, she was dreading this.

Without answering, Nick reached for her. Pulling her close, he kissed her and lifted his head with a smile. “That sounds serious. Everything okay?”

She ducked out of his arms and headed to the couch. Perching on the edge of the cushion, she motioned for him to join her. On the far end of the couch. His touch scrambled her brain and stymied her best intentions. 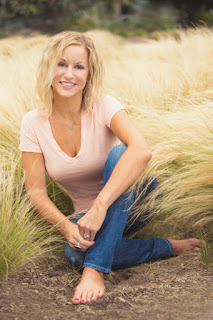 Claire Marti started writing stories as soon as she was old enough to pick up pencil and paper. After graduating from the University of Virginia with a BA in English Literature, Claire was sidetracked by other careers, including practicing law, selling software for legal publishers, and managing a non-profit animal rescue for a Hollywood actress.

Finally, Claire followed her heart and now focuses on two of her true passions: writing romance and teaching yoga. Her debut releases from The Wild Rose Press on March 31, 2017 and is the first in the Finding Forever in Laguna series.
Posted by Jana Richards at 12:30 AM