Anita Kidesu is in the Spotlight!

Anita Kidesu is my Book Spotlight guest today with her new release SURPRISE ME AGAIN. Last year both Anita and I participated in The Wild Rose Press's Candy Hearts series. The titles for these Valentine's novellas all come from actual sayings on conversation Candy Hearts. Anita chose SURPRISE ME (I chose CHILL OUT), and her new release is a full-length sequel to that story. She felt there was still a lot to say in this threesome's story. Please welcome Anita Kidesu! 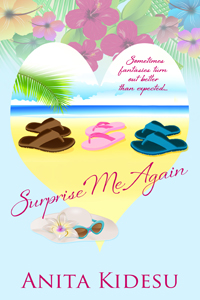 "What about you?" Josie said. "Have you ever been married?"

A flicker of sorrow passed over Josie's eyes. "Can you tell us what happened?" She frowned into her drink. "That is, if you want to."

"It's okay. I married Jessica about…” Hell how long had it been? Where had the time gone? "I guess nearly twenty years ago. Like you, we met in college, fell in love, married. Things were good for a few years."

Josie leaned to her side, allowing the waiter to place a plate before her. Ignoring her food, she folded her hands under chin and kept her attention on him. "What happened?"

"We wanted children. Jessica ached for children. It became an obsession." Eric took one of the large shrimp from the platter in the middle of the table and began peeling it with trembling fingers, giving him a chance to get his emotions under control. Lord, how he'd wanted children, but not enough to end his marriage.

"After a few years when we didn't conceive, we looked for answers. By that time Jessica was convinced she was the problem and fell into a deep depression. Nothing I did helped. She wouldn't agree to see a counselor. My mother finally convinced us to seek a fertilization doctor." Eric threw the shrimp on his plate and took a long swallow of beer. "Turns out I was the problem, not her. Seems those mumps I'd had as a kid did a number on my little swimmers. Killed them all."

Their sympathy nearly did him in. He swallowed around the lump in his throat and squeezed his damp eyes.

After all these years, the pain was still buried under his heart only to surface on dark, lonely nights and like now as he recounted the story. They were the first ones he'd opened up to. None of the other people in his threesomes had even cared to ask.

Carson took a sip of his beer. "What happened then?"

"I wanted to adopt. Wanted to create a family with Jessica. It didn't matter if the children were of our blood or not. The doctors had talked about in-vitro. Turns out Jessica didn't feel the same way." He took deep breath and tried to calm his pounding heart. He wiped his palms on his shorts.
"I came home one day with information on adoption and some on in-vitro fertilization only to find her and her stuff gone. She had left me a note, telling me she wanted children from her own body. Wanted to create them naturally. Didn't want to be married to a man who wasn't a man."

"How the hell did you handle it?” Carson asked. “I would have been devastated if Josie had done that to me."

"I drank and buried myself in my writing. I wrote my first novel during this time."

"If I recall, that book was rather cutting against women," Carson said.

Eric shook his head and chuckled. "Yeah. I enjoyed killing off my heroine. Coincidentally, she closely resembled my ex."

"Did you get in trouble for it?" Josie asked, peeling her third shrimp.

"Since I use a pen name, I don't think she even knows I write. Besides, she was too busy finding another husband to father her eight children."

Carson choked on his beer. "Eight?"

"Yeah. She really did want kids, but I'm not sure I would have agreed to that many. I was also told she's gained about a hundred pounds." Under Josie's quiet scrutiny, he dropped his gaze to his plate.

"It still hurts, though, doesn't it?" Josie asked.

Eric shrugged. "It's not as bad as it was. I sometimes think about how I could have kids in college or be a grandfather by now." 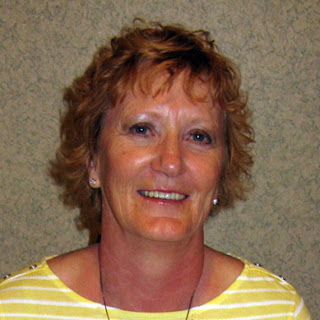 From the time she was a teenager, Anita would sneak her grandmother's romances and read them until all hours of the night. She never thought about creating one herself, but fell into it with a few friends. On a long road trip, they started talking about their favorite authors and why they like their books. To kill time, they started making up their own characters and plot.

Now, in between being a pharmacist, taking care of her two cats, and spending time with her family and friends, she writes. Her stories are about love and romance on the edge.