M.S. Spencer: In the Spotlight!

My guest today is M.S. Spencer who is here to talk about her new release, LAPSES of MEMORY from The Wild Rose Press. This timetravel/adventure romance is about two star-crossed lovers whose lives keep crossing at different times. Please welcome M.S. Spencer! 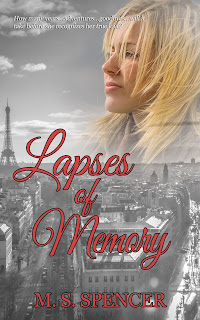 Thanks so much for giving me a chance to talk a little about the background to my new romantic suspense Lapses of Memory.

It takes thirty years for Sydney to recognize her true love only to have him forget her.

It is spring in Old Town Alexandria, and Sydney Bellek is dictating her memoir to her daughter Olivia. Every few years from the age of five she meets her true love Elian Davies, but while he remembers her, she doesn’t recognize him. Only after surviving wars, revolutions, and years of separation will she realize they are meant to be, but this time it is Elian who has lost his memory of her. Will he remember her before she loses heart or will their new love be enough to replace the old one?

Meanwhile, her daughter Olivia has her own dilemma—how to choose between the rich and dashing Rémy de Beaumec, who wants to take her around the world, and the steady, quiet, American-to-the-core, Benjamin Knox, who only wants to make her happy.

As journalists, Sydney and Elian fly a lot. Since in the story they only meet every few years, the dates of their meeting on a plane coincided strangely and wonderfully with new aircraft designs coming on line. Research on the development of flight technology led me to learn some interesting facts. First, the early commercial airlines were designed for comfort rather than speed. The Boeing Stratocruiser that Sydney takes when she is five had sleeping berths and a lounge, and meals were served on china plates with fine wines in etched crystal goblets. As with most advances, luxury was soon sacrificed to speed, and by the 1970s we had the SST Concorde, which made the flight from New York to London in less than three hours. Then the amazing growth in passengers blew me away. In the 1950s air travel was limited to a few adventurous souls and planes carried 100 passengers. Today the Airbus A380 can handle up to 840. In 1950 17 million people used air transportation. In 2011 an estimated 2.75 billion people flew. Sydney’s travels span the airplanes from the Boeing 377 to the Boeing 787, the Dreamliner, which flies today.

Several beers later, they wobbled out to the lobby holding hands. Sydney had learned enough to know this Elian was a complex person and really, really cute. When they reached her room, he backed her against the door. She could feel his penis throbbing through his jeans and took a minute to revel in the desire the friction kindled before pushing him away. He set his arms on either side of her and regarded her with serious eyes. “You still don’t remember me, do you?”

She shook her head. She didn’t really want to recognize him. Placing him in some other context could only be deflating. She liked him now, a tall, thin, russet-haired man with a pulsing member and inviting mouth, currently blowing a tidal wave of pheromones in her direction.

He continued to stand there, making none of the moves she wished he’d make. Finally, she took a step toward him and held out her lips. Leaning in, he took them with his. The link pulled the rest of their bodies together. Arms went around waist and neck, bellies ground against each other, thighs intertwined. Sydney fell into a long, dark, winding tunnel that squeezed her, taking her breath away. She no longer felt corporeal, but more like a soft piece of quivering tissue, the bones dissolving, reduced finally to a pool of liquid heat.

He broke away, panting. “Now do you remember me?”

Her arms empty, she tried blinking to drag herself back to the present. Elian swam into view. His cerulean eyes shot signals, signals that she couldn’t decipher. What does he want of me? Why can’t we live for the moment? Just be in the here and now? For an instant she thought of lying, but somehow she knew he would see through it, that it would only push him farther away. “I’m sorry.”
He lifted his hands, then dropped them in frustration. He gazed at her, pleading. She couldn’t help him. Bits of him seemed familiar—as though those features belonged to someone else she’d known a long time ago. Other bits, like his deep, gruff voice and his air of insolence, were strange and new. A fleeting sense of abandonment passed through her. Whoever he reminded her of had left her once before. She didn’t want that loneliness again. She turned from him and put the key in the door. He caught her arm. “We’ll meet again, Sydney.”

She tried to match the hope in his voice. “Perhaps we will.” She ran inside and threw herself on the bed. After a good cry and a call for room service, she paced the room, trying to get a grip on her emotions. Something deep in Elian’s eyes drew her. She didn’t recognize his face, but she felt a linkage, a bond with him. An affinity shared, but long ago. She understood him, knew him. A face rose before her, but all jumbled as though she looked at it through a kaleidoscope. Eyes, chin, nose, cheeks, all split up into triangles and rhomboids, making the face as inscrutable as a Picasso painting.

Halfway through the chicken cordon bleu, she stopped, fork stalled two inches from her mouth. Why does he care whether I recognize him? What is this rapport I sense? Is there some deep, dark secret I should know? Oh my God, is he my long-lost brother? 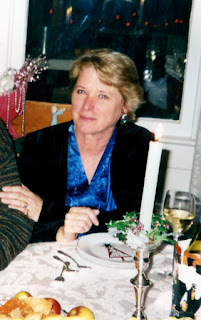 Although M. S. Spencer has lived or traveled in five of the seven continents, the last thirty years were spent mostly in Washington, D.C. as a librarian, Congressional staff assistant, speechwriter, editor, birdwatcher, kayaker, policy wonk, non-profit director, and parent. After many years in academia, she worked for the U.S. Senate, the U.S. Department of the Interior, in several library systems, both public and academic, and at the Torpedo Factory Art Center.

Ms. Spencer has published ten romantic suspense novels, and has two more in utero. She has two fabulous grown children and an incredible granddaughter. She divides her time between the Gulf Coast of Florida and a tiny village in Maine.

My calendar of events can be found here:
Romance Books 4 Us: http://www.romancebooks4us.com/M.S._Spencer.html OR
http://bit.ly/1d6ehza
Posted by Jana Richards at 12:30 AM