Clothes introduce and identify your fictional characters. Period costumes and uniforms communicate their personalities, social positions, and even occupations.

Because Wild Rose Pass is a period piece, set in 1880s, I needed to research women’s fashions from the era. 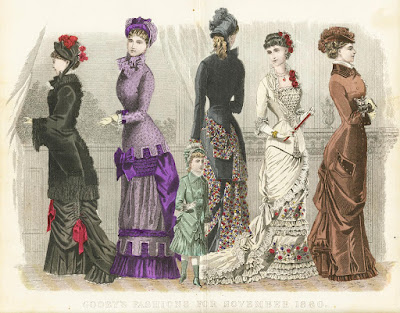 The skirts of women of leisure were intricate compositions of folds and drapes. Bustles reappeared, and frills and lace trimmed the bodices. But a fashion revolution was afoot. Sensible clothing was becoming acceptable for women who worked in factories, as well as for sports minded women.
Cadence, the heroine, was ahead of her time. An 1880s society belle, she wanted to escape her constricted lifestyle of corsets and side-saddles. In the following scene, she musters the nerve to wear the convertible riding skirt she designed for the first time.

What appeared to be a skirt at first glance was flared pants that allowed her legs mobility. Modesty panels covered the front and back slits when she stood but also covered her ankles when she rode astride. “When I was out East, I rode side saddle like a proper lady, but riding aside on these trails is dangerous.” Squaring her shoulders, she lifted her chin. “Why risk breaking my neck when I can sit more comfortably and safely in the saddle?”

Tongues wagged at the fort because her conduct was “unbecoming for a young lady.”

“Nothing goes unnoticed at a fort. Living on a post is like living in a cage.” She examined her gloves and riding skirt, and then sighed. “The pins of patience.”

“The pins of patience…?” He squinted, unsure he heard right.

“Flossie has a favorite saying. ‘Women ought every morning to put on the slippers of humility, the shift of decorum, the corset of charity, the garters of steadfastness, and the pins of patience.’ ”

Clothes not only set the tone of your characters, but they lead to the conflict and action.
Because Wild Rose Pass is set in an 1880s cavalry outpost—Fort Davis, Texas—I also needed to research US officers’ uniforms from the era. However, the hats, boots, gloves, pants, and shirts of 1870 to 1880 lacked uniformity as the following photo illustrates. 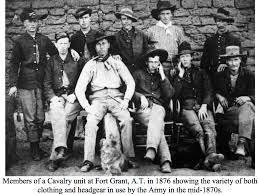 Following the Civil War, the Army had a massive surplus of uniforms. When the medium sizes were depleted, the unpopular “Swiss blouse” was introduced, quickly  followed by the 1876 sack coat. So by 1880, the Army wore four versions of uniforms. Finding the uniform was a challenge, but the following photo nails it. 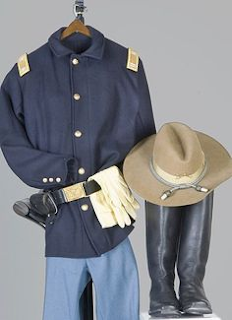 In Wild Rose Pass, the officers’ hats, gloves, and uniforms serve as the props for indicating superiority, frustration, anger, or urgency.

Holding out his kidskin-gloved hand to Cadence, he stepped in front of Ben.
Not phrased as a question, his tone was a command—a senior officer speaking to a subordinate. Catching her breath, Cadence stiffened.

Riding at the front and wearing long, white leather gloves, James raised his arm to halt his men. Then dismounting, he tossed his horse’s reins to a private.
She wrinkled her nose. So theatrical—as if he’s the marshal leading a parade.

Ben tightened his grip on his hat, twisting the rim between his fingers. “Have you sent out a scouting par—”
“Of course.”
“Did you take a tracker with you?” Clenching and unclenching his hat rim as he curled first one side and then the other, Ben struggled to keep the frustration from his voice.

Before reveille? “Thank you, sergeant.” Ben yawned as he pulled up his suspenders and pulled on his boots.

Pay attention to your characters’ clothes. They not only set the tone and serve as props—they make the characters! 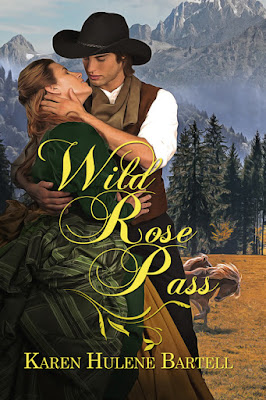 Cadence McShane, free-spirited nonconformist, yearns to escape the rigid code, clothes, and sidesaddles of 1880s military society in Fort Davis, Texas. She finds the daring new lieutenant exhilarating, but as the daughter of the commanding officer, she is expected to keep with family tradition and marry West Point graduate James West.

Orphaned, Comanche-raised, and always the outsider looking in, Ben Williams yearns to belong. Cadence embodies everything he craves, but as a battlefield-commissioned officer with the Buffalo Soldiers instead of a West Point graduate, he is neither accepted into military society nor considered marriageable.

Can two people of different worlds, drawn together by conflicting needs, flout society and forge a life together on the frontier?

Reining his horse between catclaw and prickly-pear cactus, Ben Williams squinted at the late summer sun’s low angle. Though still midafternoon, shadows lengthened in the mountains. He clicked his tongue, urging his mare up the incline. “Show a little enthusiasm, Althea. If we’re not in Fort Davis by sunset, we’ll be bedding down with scorpions and rattlesnakes.”

As his detachment’s horses clambered up Wild Rose Pass, the only gap through west Texas’ rugged Davis Mountains, Ben kept alert for loose rocks or hidden roots, anything that might trip his mount. A thick layer of fallen leaves created a pastiche of color shrouding the trail from view. He glanced up at the lithe cottonwood trees lining the route, their limbs dancing in the breeze. More amber and persimmon leaves loosened, fell, and settled near the Indian pictographs on their tree trunks. When he saw the red- and yellow-ochre drawings, he smiled, recalling the canyon’s name—Painted Comanche Camp.

“How far to Fort Davis, lieutenant?” called McCurry, one of his recruits.

“Three hours.” If we keep a steady pace.

Without warning, the soldier’s horse whinnied. Spooking, it reared on its hind legs, threw its rider, and galloped off.

As he sat up, the man groaned, caught his breath, and stared into the eyes of a coiled rattler, poised to strike. “What the…?”

Flicking its tongue, hissing, tail rattling, the pit viper was inches from the man’s face.

A sheen of sweat appeared above the man’s lip. “Lieutenant—” 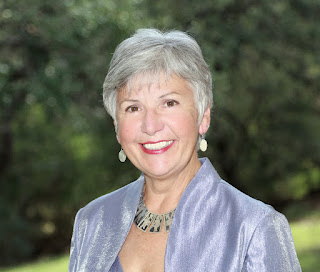 Author of the Trans-Pecos, Sacred Emblem, Sacred Journey, and Sacred Messenger series, Karen is a best-selling author, motivational keynote speaker, wife, and all-around pilgrim of life. She writes multicultural, offbeat love stories that lift the spirit. Born to rolling-stone parents who moved annually, Bartell found her earliest playmates as fictional friends in books. Paperbacks became her portable pals. Ghost stories kept her up at night—reading feverishly. The paranormal was her passion. Westerns spurred her to write (pun intended). Wanderlust inherent, Karen enjoyed traveling, although loathed changing schools. Novels offered an imaginative escape. An only child, she began writing her first novel at the age of nine, learning the joy of creating her own happy endings. Professor emeritus of the University of Texas at Austin, Karen resides in the Hill Country with her husband Peter and her “mews”—three rescued cats and a rescued *Cat*ahoula Leopard dog.

AUTHORSdb: https://authorsdb.com/community/17847-karen-hulene-bartell
Posted by Jana Richards at 12:30 AM