Seelie Kay and THE PRESIDENT'S WIFE

Happy Tuesday! Today's guest is Seelie Kay with a contemporary romantic suspense with political intrigue and a bit of kink. Seelie is offering some ebook prizes in her giveaway so make sure to enter the Rafflecopter at the end of this blog. Welcome Seelie!

The President’s Wife
by Seelie Kay

Seelie will be giving away  an ebook of The Garage Dweller to three lucky winners drawn via Rafflecopter. Please use the Rafflecopter below to enter. Remember there is a chance every day to enter to win. You may find all the tour locations here.

Where did you get the idea for THE PRESIDENT'S WIFE:

When I started thinking about this story, the news was filled with allegations about Russian interference with the presidential elections. Since this book was coming out around July 4, America’s Independence Day, I knew I wanted to do something that emphasized the importance of freedom. All of the uproar about the Russians took me back to a different time—the Cold War—when we lived in fear of a nuclear attack by the Soviet Union. So, I began musing about what would happen if the Russians actually did co-opt the government of A free nation. Ultimately, The President’s Wife was born.

This book actually combines two genres: Romance and thrillers. It is, in effect, about a political conspiracy uncovered by a very hot and sexy couple who are very much in love, involving another couple being blackmailed because of the love they have for each other.  Those genres just seemed to naturally lend themselves to this story.

My grandparents immigrated to this country in the early 1900s from Czechoslovakia. When I was in my teens, that country was still under Soviet control. However, my grandmother wanted to see her family again. So, my father brought her back for a month-long visit. Throughout their trip, they were closely watched by communist officials and some of their relatives were afraid to receive them in their homes out of fear of retribution. At one point, my father was detained for taking a photo of a church that turned out to be a military installation and would have been jailed if not for a second cousin, who was a higher up in the Communist Party. (They did confiscate the film, however.) And when they got back to the U.S., my grandmother told me she had been afraid every single day. That experience had a significant impact on me. It taught me that we must value freedom, because not everyone has the privilege of being free.

What do you want readers to come away with after they read THE PRESIDENT'S WIFE?

That we should not take freedom for granted. It is our responsibility to respect and protect it, because once it is lost, it may be hard to win back. Even in the U.S., a country that has been free for 242 years, we must be vigilant. Our freedoms are threatened every single day.

I am a pantser, I am afraid. When I am inspired, I just let the story flow. And I don’t stop until I am done. I never know where an idea will take me but I always wind up somewhere!

That I am an MS Warrior. I was diagnosed in 2002, and although I am somewhat mobility impaired, I continue to write.

I am Wisconsin born and bred. Although I have lived in other parts of the country, I returned to WI about 30 years ago and now live outside Milwaukee. I can’t imagine living in a place without the four seasons, no matter how much I complain about the winters and the summers. (I am definitely a spring/fall girl.)  As I said earlier, I can’t remember a time when I wasn’t writing. In fact, my mother saved my four-year-old missives in which I complain about what I considered an unfair punishment. My parents were teachers. We had to apologize, in writing.

Food. I am a true foodie. I love to cook and bake or try out new restaurants. In fact, it’s how I relieve stress or work through plot problems when writing. A nice glass of wine is sometimes the perfect end to a busy day.

I am an attorney and journalist, but these days if I am not writing my own books, I am ghostwriting books for others.

Name two authors we might find you reading when taking a break from your own writing.

What do you like best about your heroine in THE PRESIDENT'S WIFE?

She’s smart and determined, and most importantly, committed to justice.

It’s a story about four former law school classmates who get shafted by their mates and seek revenge.

Sizzling short stories about lawyers in love, with a dash of kink!  That is what I write about…

The Garage Dweller. I think it provides a good sense of how I write and what I write about.

The President’s Wife is a novella about a criminal defense attorney who uncovers a conspiracy to destroy the government of a newly free nation. Here’s the blurb:


When criminal defense attorney Julianna Constant travels to Washington, D.C. to join her former college roommate, Marella de la Aerelli, in celebrating her husband’s election as the first president of the newly democratic Republic of Lodatia, she is met with an unpleasant surprise. Her friend of almost 30 years not only looks unwell, she is cold and distant. After Julianna becomes convinced the woman is really an imposter, she attempts to expose the faux Marella by using a secret only she, Marella, and the sitting U.S. President share. In the process, Julianna helps to uncover an international conspiracy to seize control of the new country, using the president’s wife as a pawn in a dangerous and potentially deadly game. Will Marella be rescued before a coup takes place? Or will she become collateral damage in one tiny nation’s fight to be free?

Thanks for speaking to me, Seelie!

About The President’s Wife:

What happens when one of your best friends, the First Lady of the newly democratic Republic of Lodatia, appears to be an imposter? If you’re criminal defense attorney Julianna Constant, you pursue the truth like a rabid dog, then wage a battle to save your friend’s life. When criminal defense attorney Julianna Constant travels to Washington, D.C. to join her former college roommate, Marella de la Aerelli, in celebrating her husband’s election as the first president of the newly democratic Republic of Lodatia, she is met with an unpleasant surprise. Her friend of almost 30 years not only looks unwell, she is cold and distant. After Julianna becomes convinced the woman is really an imposter, she attempts to expose the faux Marella by using a secret only she, Marella, and the sitting U.S. President share. In the process, Julianna helps to uncover an international conspiracy to seize control of the new country, using the president’s wife as a pawn in a dangerous and potentially deadly game. Will Marella be rescued before a coup takes place? Or will she become collateral damage in one tiny nation’s fight to be free? 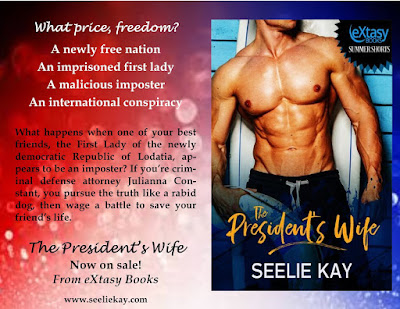 The state dinner at the White House was in full swing. Waiters were busy delivering food and pouring wine, as guests ate and chatted with others seated at their tables.

Julianna picked at her dinner, some sort of beef dish with quirky vegetables, and continued to study Lodatian President Georges and Mrs. Marella de la Aerelli, as they chatted quietly with the U.S. president and his wife. Marella barely looked up from her plate, and conversation with her hosts appeared to be minimal. God, that is so not the Marella I know. She hasn’t even acknowledged me and I sent her an email informing her that I would be here.

Julianna set her fork down on her plate and nudged her husband, Little River, Wisconsin Police Chief David Manders. “Something’s wrong.” Julianna whispered. “Marella looks wrong. Maybe she’s just tired after the campaign, but she looks sick. Too thin and too pale. And she isn’t smiling. Marella is always smiling, even when she feels like shit. And she hasn’t even looked at me. Why is she ignoring me? Something is not right. I can feel it.”

David looked at his wife and tried to hide his smile. “Jules, you find a conspiracy behind every door these days,” he said quietly. He looked around to ensure that the other four couples seated at their table were otherwise engaged. “I vote for tired, no, make that exhausted. My God, five months ago, she was a farm wife in Lodatia, now she’s been thrust into the international spotlight as the wife of the President. That would exhaust anyone. I know if you ran for president, it would have a negative impact on me.”

Julianna smirked. “If I became President, sir, it would have a negative impact on both of us.”

David sighed and ran a hand through his short, silver hair. His piercing blue eyes gazed at his wife, his fondness apparent. “Well, instead of jumping to conclusions, let’s wait until the reception at the Lodatian Embassy. There are a lot of rules and protocols for visiting dignitaries. Maybe it just isn’t appropriate to buddy up to an old friend at a state dinner. Once you get up close and personal with Marella, you can get a better fix on things. That woman has been through the wringer, what with that opposition group trying to assassinate her husband not once, but twice. I imagine the stress of clinging to Lodatia’s newly formed democratic government is a kind of like hanging on to a cliff, knowing that if you fall, there will be no net to catch you. Cut her some slack and do not tell her she looks awful.” 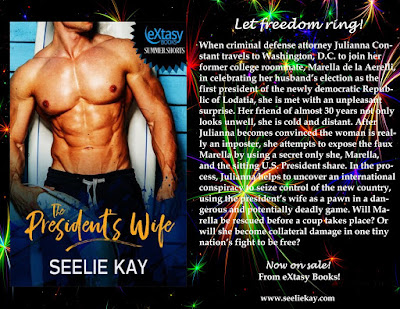 Seelie Kay writes about lawyers in love, with a dash of kink.

Writing under a nom de plume, the former lawyer and journalist draws her stories from more than 30 years in the legal world. Seelie’s wicked pen has resulted in nine works of fiction, including the Kinky Briefs series, The Garage Dweller, A Touchdown to Remember, and The President’s Wife, as well as the romance anthology, Pieces of Us.

When not spinning her kinky tales, Seelie ghostwrites nonfiction for lawyers and other professionals. Currently she resides in a bucolic exurb outside Milwaukee, WI, where she shares a home with her son and enjoys opera, the Green Bay Packers, gourmet cooking, organic gardening, and an occasional bottle of red wine.

Seelie is an MS warrior and ruthlessly battles the disease on a daily basis. Her message to those diagnosed with MS: Never give up. You define MS, it does not define you!