Alice Renaud joins me today to talk about her pets and  about her new release MERMAIDS MARRY IN GREEN. I have to agree with Alice about cats - they can be so smart and yet so... not smart. We just babysat our daughter's cat for the last of weeks. Somehow she got into the cold air vents and started travelling around the duct system of our house! Fortunately, she always found her way out. We think she was a little too bored and much too curious! Thanks for being my guest, Alice! 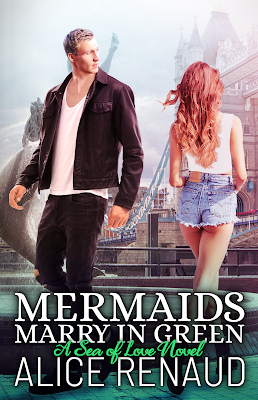 I love animals and am a keen birdwatcher. The natural world plays a big part in my stories. My favourite pets are cats. I adore cats. All that savagery and wildness, lurking under the fluffy appearance! And cats are funny. My aunt had a Siamese cat who was so clever, he trained the dog to help him open doors. He would climb on the dog’s back, and press the handle down with his paw. Clever, eh? Yet he also had a habit of eating wool – cashmere sweaters were his favorite – so my aunt regularly had to take him to the vet so they could take the wool out of his stomach before it choked him… so in some ways he was very clever, in other ways, not so much…

We had up to eight cats at home when I was a kid. As a grown up, with a family of my own, I have limited myself to one at a time. The two most recent ones were a feisty tortoiseshell she-devil-cat called Tails and a very soft, gentle white male called Jamie. They have both died now of old age, and gone to the big basket in the sky. We are between cats now, so we content ourselves with our extended family’s cats. Here is a picture of my aunt’s cat Tabitha, watching her “friend” Milligan through the window! 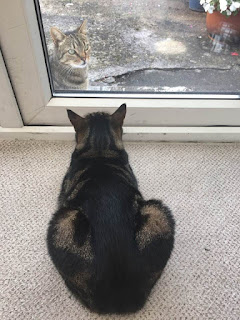 In my new release Mermaids Marry in Green, my warlock hero and shifter mermaid heroine acquire an unusual pet. They have been tasked with capturing an afanc, a water monster, that is threatening London with flooding. But when the heroine, Caltha, discovers the creature, she finds, not a scary monster, but a frightened animal in need of help. Of course, she has to rescue it! But evil warlocks are after the magical creature…  The afanc is a mythical Welsh monster that lives in lakes and rivers. He is part beaver, part crocodile. I love Welsh legends and their fantastical creatures. The Black Sow that King Arthur hunts, mist hags, torrent spectres… and of course, the Giant Cat of Anglesey!

Read more about the afanc and his new friends below.

Blurb for Mermaids Marry in Green:

Caltha Dooran is the toughest, fiercest shape-shifting mermaid in the western seas. She has three Clans to rule, and no time for romance. But when a warlock, Jonty, turns up and asks her to come with him to London to capture a water monster, she can't say no. In London, away from her duties, her attraction for Jonty grows... and they soon fall under each other's spell. But will his past and her responsibilities pull them apart, or can they find the only true magic, the one that binds two souls together?

A pile of twigs shuddered and slid to the side. Two yellow eyes peered at her out of the tangle of wood and litter. Excitement exploded in Caltha’s chest, rocking her whole body. She’d found him! But she strove to keep her voice low and soft.

A reptilian head that looked like a crocodile’s, but smaller, pushed through a plastic bag. The mouth opened, revealing a row of sharp teeth. “Morwenna?” the creature hissed, in Caltha’s language.

She tried to repress the trembling in her body and appear calm so the creature wouldn’t take fright. “Yes, I am a mermaid.” She lifted her webbed hands to show him. The afanc extended a furry paw, tipped with powerful claws. Caltha brushed the damp fur with her fingers. “I’m Caltha.”

The afanc let out a sigh. “Morwenna Caltha,” he said. He stared at her with shining eyes full of hope. “I am lost. Can you help?”

The afanc stretched his neck towards her. “Please?”

The question was how. She’d been so focused on locating him, she hadn’t really given any thought as to what she would do when she found him. She studied his reptilian head and large, furry body. No way would he go unnoticed in a city full of humans. And dangerous warlocks were on his trail. Her mind worked overtime, searching for solutions. Would he follow her willingly, or would she have to trap him? He seemed friendly now, but he might panic if she tried to lead him away from his familiar surroundings. And how could she keep him hidden?

“Can you swim underwater?”

“Not for long. I cannot breathe underwater like you.” The afanc was shaking, from cold or fright. His vulnerability tugged at Caltha’s heartstrings. She’d do anything to save him.

“Don’t worry; I’ll think of something.” She started to scramble up the slope, but the creature shrank back, trembling. Caltha stopped. “I won’t hurt you. You need to come with me. I’ll take you somewhere safe, away from the humans.”

The afanc sighed. “Thank you, Caltha.”

Her chest contracted as she realized that she had no idea where she would take him, or how she’d get him there. She’d spoken too fast, thinking only of reassuring him. Now she’d made a promise, and she didn’t know how she’d keep it. Where could they go where he would be safe? She didn’t want to leave him in London, at the mercy of the warlocks. Even the nice ones would seek to use him. She’d heard of their fascination with magical creatures. They’d want to study the afanc, to figure out how he made the waters rise. She couldn’t let him become a laboratory exhibit. He needed to be with his own kind, except he was one of a kind.

Alice lives in London, UK, with her husband and son. By day she's a compliance manager for a pharmaceutical company. By night she writes fantasy romance about shape shifting mermen, water monsters and time-travelling witches. Her first book, “A Merman’s Choice,” was published in January 2019 by Black Velvet Seductions. It is the first book in a fantasy romance trilogy inspired by the landscapes and legends of Brittany and Wales. The second book, “Music for a Merman,” is out now and the third, “Mermaids Marry in Green,” will be released on 1 November. Alice has also written two short stories for BVS anthologies, “The Sweetest Magic of All,” in “Mystic Desire,” out now, and “The Holiday Mermaid” in “Desire Me Again,” out on 1 October. Alice loves reading and writing stories, and sharing them with anyone who’s interested!