Jean Adams stops by today with 5 Quick things about her. I didn't know a person could become allergic to caramel! This Wild Rose Press author gives us a peek at HONEY'S GREEK BILLIONAIRE, and she tells me she has a new book coming out soon. Watch this space! Welcome Jean! 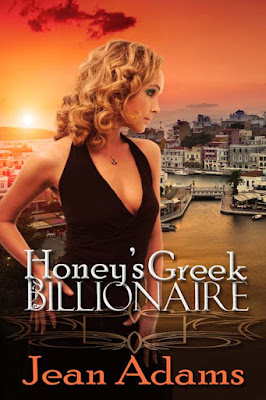 Fav color: Yellow, it’s bright, happy and reminds me of the sun.

Fav drink: I love water, but  I also like to make my own veg and fruit juices.  Lots of nutrition and no sugar.

When I’m alone I like to... play ancient Egyptian solitaire while thinking up new stories.

Chocolate or caramel: Chocolate. I had so much caramel, I made myself allergic to it.

When Honey Preston asks her a billionaire Greek boss to marry her, solely as a ploy to stop him flirting with her, she gets the surprise of her life. He says yes.

Paris Magdalinos knows it’s a joke, but has his own agenda for agreeing. For the sake of his father’s health he will do whatever it takes.

Honey, too, wants to avoid marriage to a man who is pestering her, seeing her as a drudge and a mother for his son. Paris is offering her a way out for a brief marriage of convenience.

But when the newlyweds fall in love, will they still want to call it quits.

So that was the man himself. Paris Magdalinos. The one they drooled over when anyone mentioned a man to die for. He was that, all right, no doubt about it. And didn’t he know it?

Honey’s gaze flicked around the room. Good grief, some of the women were practically dissolving at his feet.

She’d seen pictures of him in staff magazines and now admitted, grudgingly, that the photographs—usually taken of him looking amazing, tanned and healthy, seated at the boardroom table in Athens—didn’t do him justice.

There were other pictures, too: women clad in nothing more than skimpy bikinis on the deck of his super yacht, Aphrodite, usually moored at his island home of Limnos. She was willing to bet he more than earned his playboy reputation. A yacht so aptly named had to have some high-old shenanigans going on there on a regular basis.

He was usually pictured in dark suits, with a few black hairs peeking over the top of an open-necked shirt. Today was different. He wore a cream suit teamed with a pale gold-colored shirt and matching tie. She was forced to admit, reluctantly, that his cheeky, sexy grin would make a toothpaste advertisement look dull. His smile lit up the entire room, like much-needed sunshine on this wintry-gray day.

She took every opportunity to study him under her lashes while he engaged others in conversation. He was the kind of man every woman dreams about, and yes, she had to admit in a weak moment, herself included. Luckily, men like Paris Magdalinos, with dark good looks, million-megawatt smiles, and money to burn, were way out of her league.

He wasn’t merely boss of the London office. He was head of the entire company worldwide. And he had come all the way from his sunny Aegean home base to take over the reins of this investigation for however long it took to trace the stolen money.

A shiver of awareness scooted down her backbone. She was the one who would have to work closely with him.

No Other Love, TWRP

jeandrew@xtra.co.nz
Posted by Jana Richards at 12:30 AM