#NewRelease from Kathy Otten: A Place In Your Heart

Kathy Otten is here with her new release from The Wild Rose Press. A PLACE IN YOUR HEART is a historical romance set during the American civil war. The hero of this novel is different from your typical romance hero. The heroes in romance novels are often very confident, sometimes to the point of cockiness. But Charles is socially awkward, especially with the heroine. And he tells really bad jokes. Welcome Kathy! 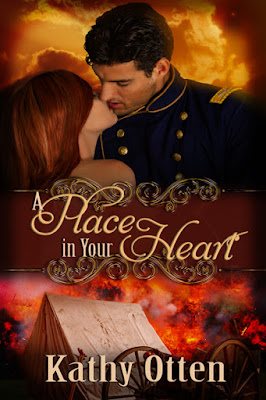 Thanks for having me today. My new book A Place In Your Heart was just released and I appreciate being able to share a bit about it with you.

It took me years to write, partly because my job and family kept me busy, but I was also working on another project at the time. The research for this novel which takes place during the Civil War, was daunting at times, but fun. Because the hero is a surgeon, it was tough keeping his knowledge true to the period, and I spent a lot of time perusing medical books from that time. Charles was a different sort of hero because he’d spent so much of his life alone with books that he had no social skills and was at a loss when it came to dealing with his attraction to the heroine, a feisty Irish nurse named Gracie McBride.

Blurb, A Place In Your Heart:

Gracie McBride isn’t looking for love; she’s looking for respect. But in this man’s world of Civil War medicine, Gracie is expected to maintain her place changing beds and writing letters. Her biggest nemesis is the ward surgeon, Doctor Charles Ellard, who seems determined to woo her with arrogant kisses and terrible jokes.

Charles is an excellent surgeon. He assumed he would be well received by an army at war. He was not. Friendless and alone, he struggles to hide the panic attacks that plague him, while the only person who understands him is a feisty Irish nurse clearly resolved to keep him at a distance.

But, Charles is sent to the battlefield, and Gracie is left with a wounded soldier, a box of toys, and a mystery which can only be solved by the one man she wishes could love her, both as a woman and a nurse.

I wanted to pick a scene to share which showcased a glimpse of that relationship, but it was hard to find something short enough. Prior to this scene, Dr. Ellard had thought if he could make Gracie laugh she might begin to like him. So he purchased a book of jokes and jests and memorized a joke to tell her.

Like the medical knowledge, I wanted to find jokes that would be true to the time. The closest I could find was a book called Beeton’s Book of Jokes and Jests, which actually came out many years after the war, but they seemed to capture the humor of the time, so all the jokes Dr. Ellard tells Gracie came from this book.

Leaving Micah, Robbie, and Harvey to finish up the meals, Gracie filled a basin with cold water and returned to bed twelve. Wringing out several cloths, she lay one across his forehead, slipped one behind his neck, and tucked two more inside each armpit.

“I’ll come back later with fresh water.” She adjusted his blanket then picked up the basin. Mindful of spilling the contents, she maneuvered carefully around the chair, took two steps forward, and slammed into something solid.

The enamelware basin hit the wooden floor with a clang that echoed through the ward as the basin wobbled in circles for several seconds like a spinning top about to fall on its side.

“By the saints, can ye not look where yer going?” Pinching the bib of her apron, she held it away from the bodice of her dress as she quickly pulled free the pins that secured it. Looking up she could only sigh, wondering why she was even surprised to find him there.

“I was not going,” Doctor Ellard pointed out. “I was standing.”

“Well, ye should not have been standing.” Reaching behind, she tugged free the ties of her apron. “Ye should’ve stepped aside for me to pass.”

Rolling the garment into a ball, she used the dry end to blot at the wet spots on her dress.

“How could I be doing that with me head down, making certain I’d not spill the water?”

She glared at him, expecting him to at least pick up the basin. Then with a frustrated sigh, she dropped to her knees and using her apron, mopped the puddle. As she rose she snatched up the basin and slapped the wet apron inside. When he didn’t move, she side stepped around him.

She swung around and narrowed her gaze on his face. He drew a breath as if he were about to speak then said nothing.

“A king was asked,” Doctor Ellard began. “Why in some kingdoms he could be crowned at the age of fourteen, yet not be allowed to marry until he was eighteen.”

Baffled, Gracie stared at him. Had the man gone daft? He looked perfectly serious however, as though he were carefully repeating the memorized passage of a book.

“‘Because, answered the king, it is easier to govern a kingdom than a woman.’”

Every muscle in her body stilled. She wasn’t even sure she remembered to breathe as she stared at him. A joke? Was that a joke?

She drew a deep breath. “Ye’d best thank the Heavenly Father that he made you a brilliant surgeon, Doctor Ellard. For if ye had to make yer way in this world as the writer o’ comedies, ye’d starve.”

Then taking the basin and apron, she upended them against his chest and marched straight down the center of the wide aisle.

Kathy Otten is the published author of multiple historical romance novels, novellas, and short stories. She is also published in contemporary romance and historical fiction. She is a Northwest Houston RWA Lone Star winner and Utah/Salt Lake RWA Hearts of the West finalist. A Place In Your Heart is her fourth full-length novel . Currently, she is putting the finishing touches on a contemporary young adult novel.

She teaches fiction writing online and at a local adult education center, and is a regular presenter at area events. Kathy is also available for manuscript assessments and editing. She lives in the rolling farmland of western New York where she can often be found walking her dog through the woods and fields. She has been married for thirty-four years and is the mother of three grown children and one grandson.